See all works by William Leavitt

Enamored of the artifice of Hollywood sets, William Leavitt has used the tricks and tropes of professional set design and the visual language of cinema to look at how context, objects, and editing influence our understanding of narrative. Translated into an art context, Leavitt's use of conventions drawn from cinema and theater provokes questions about the differences between art and artifice. Like the boundaries between the city and the desert in the Los Angeles basin, the line between the real and the imagined, backstage and onstage, in Leavitt's work is abrupt in some places and blurry in others. Made with raw construction materials, various found domestic objects, and paintings made by the artist, Leavitt's works recall the generic sets of daytime dramas. In Planetarium Projector (1987), a spur wall divides the composition into two areas, "outside" and "inside." On the left, the "outside" is signified by a painting of a planetarium projector in a desert landscape and a shallow pile of sand on the floor, and on the right, "inside" is represented by a curtain, a potted ficus tree, and a lamp. The spatial division is clearly articulated, but our sense of what constitutes "outside" and "inside" is sketchy at best, dislocated by details like the incompleteness of the yellow paint on the wall and the strangeness of the projector shooting its images of stars back out into the universe. 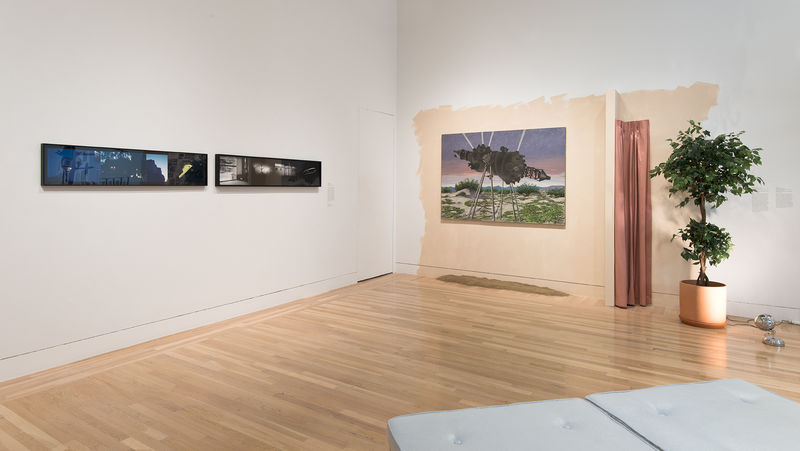 Three works by William Leavitt, from left to right: Residential B-2, 1995, Innuendo, 1995, and Planetarium Projector, 1987. Installation view at the Hammer Museum, Los Angeles
Take It or Leave It: Institution, Image, Ideology. February 9–May 18, 2014. Photography by Brian Forrest
Leavitt's investigation of narrative can also be found in his drawings, paintings, and photo­graphs. By using contiguity, he creates a visual friction that generates meaning through proxim­ity. In his drawings and paintings, shrubs, trees, exercise equipment, and buildings, along with a whole host of other natural and manufactured elements, exist in the same picture plane, improbably positioned adjacent to one another in odd scenes of contemporary American life. Abandoned by the people who would presum­ably tend to or use them, Leavitt's objects hover mutely in their compositions as though everyone has recently fled, seeking shelter from some unseen threat. His sequences of photographs evoke a similar feeling. By abutting one image against another, Leavitt again uses contiguity to draw out narrative potential. In Innuendo and Residential B-2 (both 1995), light and shadow contribute to the interplay of images. Reminiscent of 1940s film noir, 1970s period pictures, and the painterly technique of chiaroscuro, the empty rooms, illuminated facades, and vacant doorways beckon with mystery, as though something strange and perhaps forbidden is happening just behind the door or just outside the frame. By creating such provocative juxtapositions, Leavitt helps us think through ideas about the suggestive power of images and objects, our susceptibility to visual signifiers, and what amount of agency the complicity required for the suspension of disbelief might force us to surrender. In this way, his work is critical of the passive reception of images—whether in art, film, theater, or the media—arguing that meaning is deliberately constructed, often accompanied by an agenda.