Take It or Leave It: Institution, Image, Ideology

Exhibition and digital archive that focuses on the intersection of two important genres of contemporary art: appropriation and institutional critique.

Take It or Leave It: Institution, Image, Ideology was the first large-scale exhibition to focus on the intersection of two vitally important genres of contemporary art: appropriation (taking and recasting existing images, forms, and styles from mass-media and fine art sources) and institutional critique (scrutinizing and confronting the structures and practices of our social, cultural, and political institutions). The exhibition brought together works by thirty-six American artists who came to prominence between the late 1970s and the early 1990s.

Take It or Leave It was organized by the Hammer Museum and co-curated by Anne Ellegood, senior curator at the Hammer Museum, and Johanna Burton, Keith Haring Director and Curator of Education and Public Engagement at the New Museum, New York.

The majority of the works on view were from the 1980s and 1990s, a groundbreaking period that was shaped by the feminist and civil rights movements of the previous decades. Conscious of the profound impact on society of mass media such as television, newspapers, and film, artists examined critical questions of identity and representation via politically and socially engaged practices. This era witnessed a number of significant events that reverberated in the art world: the AIDS crisis, Ronald Reagan’s “trickle-down” economics and the subsequent recession, the fall of the Berlin Wall and the end of the Cold War, among others.

Expanding on the work of earlier conceptual artists who were committed to exploring the very definition of art, the artists featured in Take It or Leave It believe that art cannot be fully understood or experienced without acknowledging the contexts in which it is produced, viewed, and distributed. They point to the links between art institutions and the other organizations that make up our society, asserting that to separate art from aspects of our daily experience—whether education or medicine, marriage or war, parenting or advertising—is to reinscribe arbitrary and false divisions between art and society, between our aesthetic lives and our everyday lives.

Although Take It or Leave It was a historical show focusing on a period in the recent past, it also included recent work, arguing for the continued relevance of these artists’ practices and also revealing their sustained commitment to both historically recognizable and emerging strategies of appropriation and institutional critique. The exhibition highlighted dynamic practices in notably diverse mediums, including painting, sculpture, installation, photography, video, text, and performance. The works are by turns subtle and aggressive, poetic and didactic, emotional and intellectual. They are as challenging as they are rewarding, as radical as they are rational. Take It or Leave It seeks to revive and participate in the meaningful debates that the artists have fostered over time and to instill a desire for critique, in its many forms, to remain a cornerstone of American art.

Launched in 2017, the Take It or Leave It digital archive extends the life of this significant exhibition, with a gallery of artwork images and the associated didactic label texts from the installation at the Hammer Museum; essays, artist biographies, and a bibliography and chronology from the Take It or Leave It exhibition catalogue; and a variety of other resources meant to encourage further research. 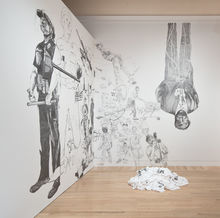 Rirkrit Tiravanija, untitled 2014 (up against the wall motherfucker), 2014 Adrian Piper, This Is Not the Documentation of a Performance, 1976 Read excerpts of essays from the exhibition catalogue. The Reunion of Appropriation and Institutional Critique
Johanna Burton

Notes on Painting in Disguise

Watch lectures, performances, and other events related to the exhibition. Fred Wilson giving his lecture, "Through the Glass Darkly: The Silent Message of the Museum." Hammer Museum, Los Angeles Guests in gallery with Tom Burr, Propped Perfume, works by Mary Kelly, Adrian Piper, and Martha Rosler during the opening of Take It or Leave It. Hammer Museum, Los Angeles