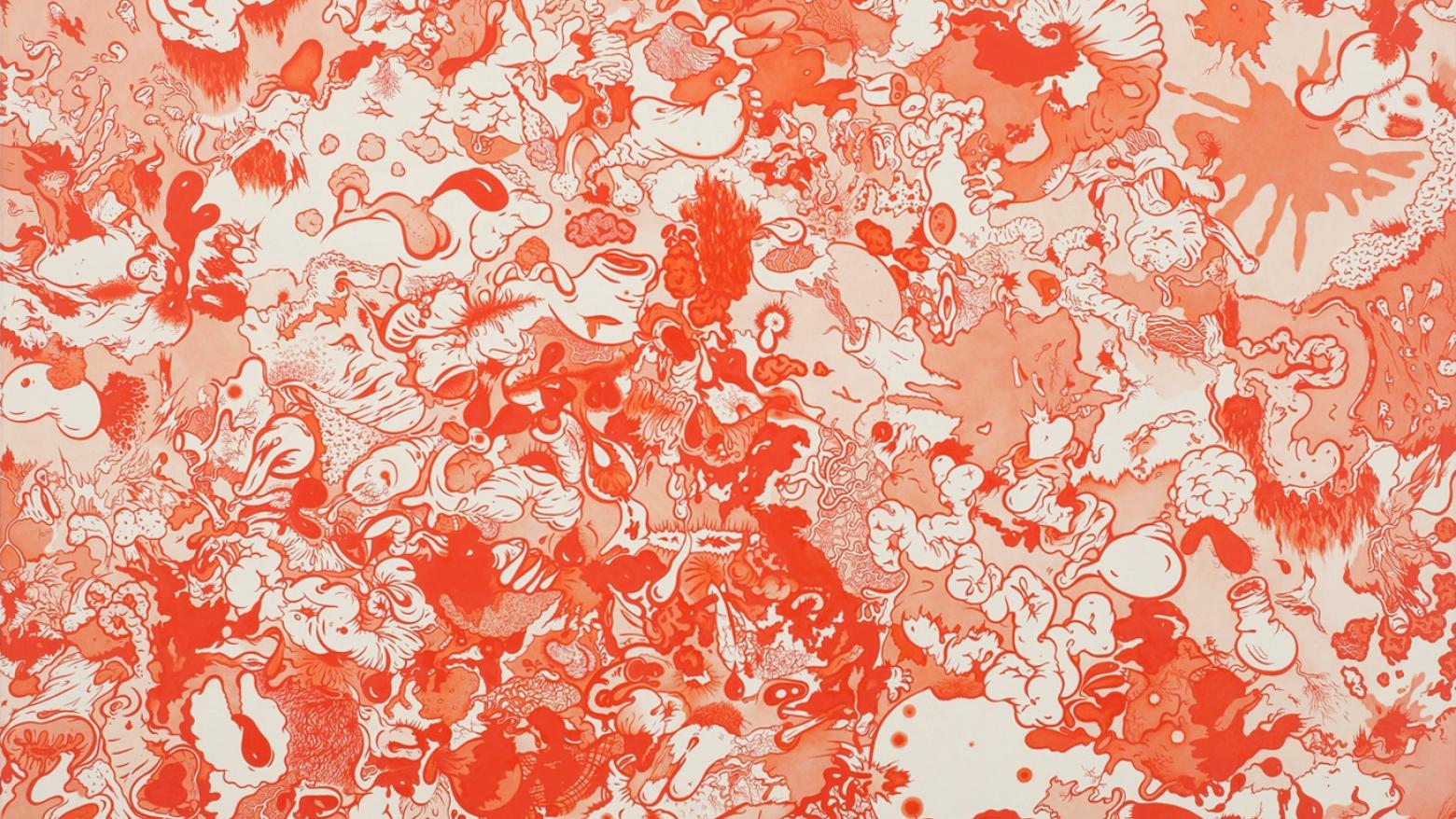 See all works by Sue Williams

Sue Williams's paintings address the human condition as it is unevenly experienced in a world of systematic and misogynistic violence. Williams moved to New York from Chicago in 1981 and forged a feminist and activist mode of painting. Through explicit, cartoonish imagery and black humor, her early paintings targeted ignominious sexual and violent behavior, some­times drawing on her own experience in abusive relationships, as well as the banality of normative domestic behaviors such as heterosexual mar­riage and the nuclear family seated at the dinner table.# Toward the end of the 1990s, Williams shifted to a more abstract, lyrical style and allover treatment of the canvas yet retained an incisive critique of political and social relations. Scooter (1992) captures a transitional moment in Williams's production: text is gone, and the graphic lines and cartoonish figures of her prior paintings have become more painterly and abstracted. A field of overlapping and disassembled bodies convulse in an orgy of mutual objectification. Her images provoke because they lay bare the psychological and emotional complex that sustains human deprav­ity, including hatred, humor, naïveté, greed, detachment, and complicity. As Dan Cameron wrote about Williams in 1992, "The sheer novelty of her free-wheeling, every-one-loses campaign has made her controversial."#

Unsettling scenes of intimacy in Williams's oeuvre are always interrelated with more public forms of inequity and hostility. In Spiritual America (1992), she reuses cartoons of male doctors fondling buxom women and of a man entering a woman from behind with a gun put to her head. Partially obscured by white washes, these scenes depict women as passive props (either patient or captive) to male potency. Perhaps in response to the normalization of such violent images in popular culture, a text panel at the bottom combines the first part of a joke about male impotence with the conclusion "Every time you tell a joke, a feeling dies." Williams's title, taken from Richard Prince's controversial rephotograph of a nude picture of a ten-year-old Brooke Shields, extends her censure of men's unchecked control over the female body to contemporary art.#

UCLA Department of Art Lectures: Sue Williams
11/9/11---Sue Williams is a New York-based painter who has had solo exhibitions at the Carpenter Center, Harvard University, Cambridge; IVAM, Valencia, Spain; Secession, Vienna, Austria; and Centre d'Art Contemporain, Geneva. (Run time: 51 min.)
Williams's critique of art becomes more explicit in The Art World Can Suck My Prover­bial Dick (1992). Around a central image of fleshy puckered lips about to take in a small penis, Williams scrawls art-world banalities: "Funny the animal shapes you can see in the paint" and "Femail [sic] imagery is a joke!" The lower right portion of the canvas (an area textually referred to as "filler") depicts the plight of artists: a path labeled "Home" leads under a sign for Brooklyn and becomes a purgatory-like staircase for a series of depressive and self-doubting female figures. In this work, Williams attacks the dry, rationalized discourses and market-driven interests that seem to assure art's total disconnect from the crises of everyday life.

In more recent works, Williams's earlier recognizable forms are abstracted into a dense web of sphincters, viscera, eyeballs, and spewing orifices, rendering the body's relationship to other forms of control and excess both more and less overt. Record Profits (2008) presents a nearly impenetrable and highly detailed accumulation of interlacing forms in shades of corporeal red. Like an excerpt from a much larger field of penetrations, ruptures, and dripping forms, the painting envisages the ever-expanding "war on terror" as an abstract expressionist bloodbath. Perhaps in reference to the sums of capital—political, cultural, or material—garnered in a Middle East war, the title darkly projects an economy that accrues and trades in dismembered bodies. Indefatigable in her examination of forms of violence through the medium of painting, Williams creates visually and emotionally bracing works that entreat viewers to examine their dense imagery as a means of looking more closely at society itself.