See all works by Renée Green

Renée Green examines cultures, histories, memories, and aesthetics through complex sculptural installations that integrate film, digital media, sound, and writing with photography, textiles, printmaking, and other mediums. Drawing on the organizing principles of cultural anthropology and social history, her artistic practice is research-intensive, theoretically rigorous, and frequently involves multiple collaborators. Since the late 1980s Green has explored a variety of subjects, including sites of the African slave trade such as the French cities of Nantes and Clisson, the figure of Saartjie Baartman (known as the Hottentot Venus), and hip-hop music in Germany. As the art historian Alexander Alberro has noted, a "methodology of citation" underlies Green's expansive artworks, which "construct a new type of history based entirely on the energies located in preexisting fragments."#

Green's Mise-en-Scène: Commemorative Toile, first made in 1992 in collaboration with the Fabric Workshop in Philadelphia, captures her use of appropriation to reexamine history and call attention to its modes of presen­tation. To make her toile, Green combined traditional bucolic scenes typical of eighteenth-century upholstery fabric with violent scenes of enslavement and uprisings. Benign floral gar­lands frame images of the lynching of a French­man during the Haitian revolution and of an enchained and unclothed black man kneeling by the desk of a sumptuously dressed white man. Using this fabric, Green constructs installations reminiscent of museum period rooms, with chairs, settees, drapes, and wallpaper crafted from the pinkish-red toile. She subverts the toile and period room as historical types to tell alternative histories. 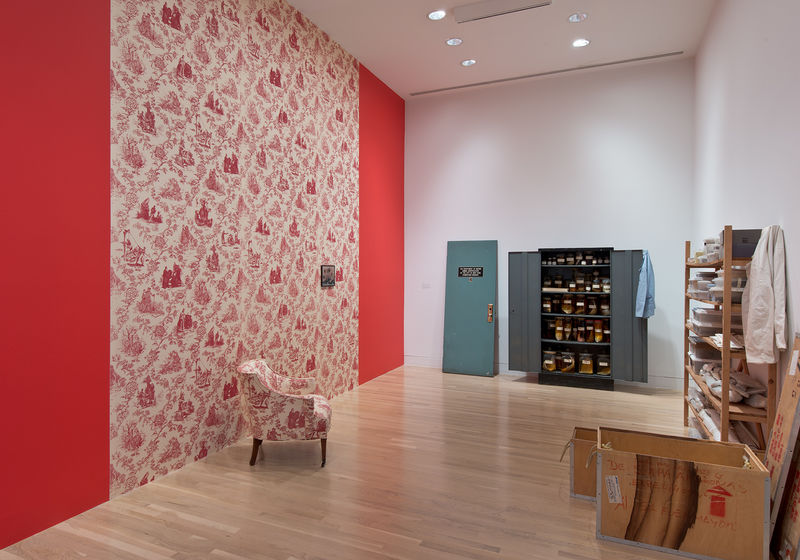 Left wall: Renée Green, Mise-en-Scene: Commemorative Toile, 1992–94; rear wall: Mark Dion, The Department of Marine Animal Identification of the City of New York (Chinatown Division), 1992; right wall: Mark Dion, N.Y. State Bureau of Tropical Conservation, 1992. Installation view at the Hammer Museum, Los Angeles
Take It or Leave It: Institution, Image, Ideology. February 9–May 18, 2014. Photography by Brian Forrest
Remarkably broad in their sources, Green's projects tend to disclose the artist's ongoing process of discovery and recovery. Venue (1994) is a short film documenting her month­long conversion of the Pat Hearn Gallery in New York into a rental space. Green advertised the space in the Village Voice and hired a booking agent to coordinate a series of events that took place inside the gallery, including a concert, a fashion show, and several mini art exhibitions. A gold disco-style sign with the generic name Venue hung on the gallery wall as if to signal the replacement of a high-culture site with one for diverse activities.# Her repurposing of the gallery as a commercial and community venue with a transparent economic structure also subtly exposed the opacity, inaccessibility, and symbol­ism that conventionally constitute art-world economics. The video documenting the project, however, also reveals the interlocking economic, social, and cultural forces that unite rather than divide art and popular culture by producing and reaffirming taste within social circles. Exploiting the gallery as a frame for social activities, Green's project typifies the joining of institutional critique and emerging discourses of relational aesthetics in the mid-1990s.

Partially Buried in Three Parts (1996–97) is a multipart installation and video work that harnesses Robert Smithson's concepts of site and nonsite and the ruins of his earthwork Partially Buried Woodshed (1970) at Kent State University in Ohio as a means to examine public recollection, private memory, and site-specificity in a mobile and global world. Conceived in part as an illustration of entropy, Smithson's buried woodshed, which the university left to decay, became a de facto memorial following the killing of four students by the Ohio National Guard during an antiwar protest on the campus.#Partially Buried (1996), the first installment of Green's work, moves fluidly between the 1970s and the 1990s, between archival footage of Smithson's earthwork and its contemporary ruins, between vigorous political and social activism and nostalgia for such movements, between Green's memories of her mother teaching at Kent State in May 1970, when the killings occurred, and the artist's interviews with locals about the event.# Like many of Green's works, Partially Buried enlists viewers to take part in the artist's personal excavation of place, history, and social relations. In these works, Green has appropriated given forms and sites to rearticulate their historical, social, and economic relations, especially as they touch on individual and collective memory.