See all works by Matt Mullican

Breaking down experience into component parts, Matt Mullican catalogs the world around him. As fellow artist Allan McCollum observed in 1980, Mullican is engaged in a life's work of articulating his "inner picture of reality," an interior landscape that has congruencies with the societal sense of reality but that also diverges into the previously uncharted territory of his subconscious mind.# Gaining access to his inner self through hypnosis—occasionally before an audience in a performance setting—Mullican makes drawings and notations, bringing back a travel diary from his psychic journey that he transposes into ongoing series of artworks in an array of mediums. Themes of growth, vacillation between the subjective and the objective, between what is known and what is not known, prevail. Because he is endeavoring to map his entire consciousness in states that alternate between wakefulness and hypnosis, the present is always shifting, allowing for a fluid, nonlinear sense of time. As a result, accumulations of information and insights can be assembled and reassembled into archives that endlessly mutate.

Over the course of more than thirty years, Mullican has developed an extensive language of signs and symbols that describe systems of knowledge, attuned equally to his subconscious mind and his experience of reality. Beginning in the early 1970s with his first cosmology drawing and a series of drawings of a stick figure he calls Glen, which simultaneously represents himself and a generic "artist," Mullican has continually pushed the concept of subject-object relations—especially the role of empathy in our understand­ing of ourselves and our interactions with others—as they relate to both making and viewing art by a process of reduction, an attempt at yielding universalities that oftentimes gener­ate, counterintuitively, more and more complex­ity. His pictographs of things like a female figure, a television, and a tree—rendered in an array of mediums and formats, including banners, draw­ings, paintings, posters, and prints—resemble the graphics seen in airports or subways, places where fluency in the local language among the user population cannot be taken for granted. Mullican's drawings in black medium on white ground have a childlike, abstract quality but often incorporate words and numbers along with symbols; some drawings, especially large-scale works made with oil stick on canvas, depict landscapes or other intricate environments featuring architecture, people, and animals. 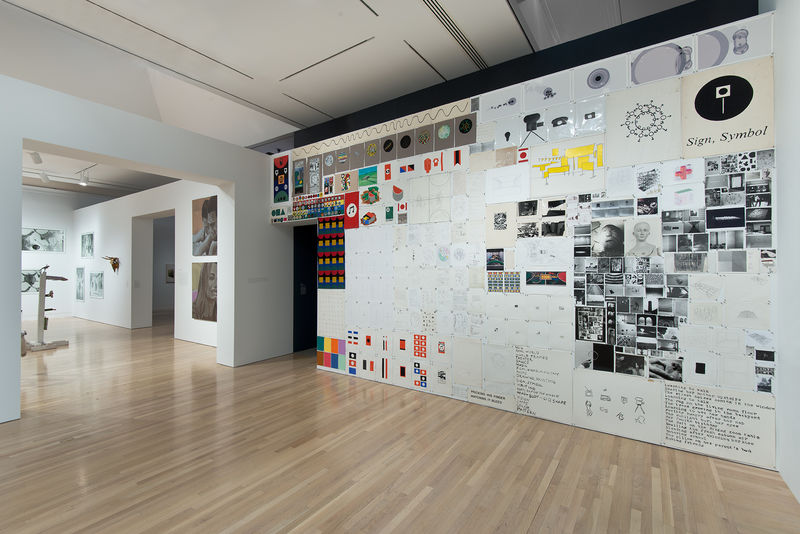 Matt Mullican, 7 1/2 Bulletin Boards, 2013; in next gallery, works by Jimmie Durham, Zoe Leonard, Sherrie Levine, and John Miller. Installation view at the Hammer Museum, Los Angeles
Take It or Leave It: Institution, Image, Ideology. February 9–May 18, 2014. Photography by Brian Forrest
Mullican's 7 1/2 Bulletin Boards (2013), composed for Take It or Leave It, is a continua­tion of a formal mechanism that the artist has been deploying for more than a decade to bring structure to his prolific output of images and notes. Culled from more than thirty years of work, the site-specific installation of drawings—arranged on a twelve-foot-high, twenty-three-foot-wide wall—expresses an underlying cosmology of his practice, emphasiz­ing accumulation and repetition but also materi­alizing the rigor of the archive.

In the article quoted above, McCollum went on to assert: "In a certain sense, then, what Mullican gives us is not quite art, but rather a complex and ambitious attempt to recreate the composition of that consciousness which pre­cedes it, and through which its creation is possible. In Mullican's work, art seeks its place in the universal order of all phenomena."# Mullican questions the very nature of reality, suggesting that most if not all of the distinctions that we make between fact and fiction, reality and fantasy, are artificial, constructed by language and history and media to imbue the culture with a false sense of stability and rationality. Art is part of this reality and as such must be included in the effort to destabilize, problematize, and reconsider that which we accept as stable and rational. By trying to enter this "consciousness that precedes it," Mullican seeks to break open the very impulse to make art in the first place.