See all works by Dara Birnbaum

Dara Birnbaum studied architecture at Carnegie Mellon University and painting at the San Francisco Art Institute, but her encounter with the video art of Bruce Nauman, Vito Acconci, and Dennis Oppenheim a few years later changed the course of her career.# She moved to New York in late 1975 and turned her practice to the moving-image medium, quickly becoming one of the most experimental and prominent video artists of the moment. For her first exhibi­tion, Lesson Plans (To Keep the Revolution Alive), which took place at Artists Space in 1977, Birnbaum extracted still images from prime-time television and Super 8 films to both arrest the relentless forward motion of these media and scrutinize their invisible codes. By juxtaposing the stills and adding text panels with imagined dialogue, she constructed a complex narrative of competition, exposing values at the center of these mass-media forms.

Extending this critical and deconstructive impulse, she began to use video, sound, found footage, and an array of editing and image-processing techniques to investigate the content and conventions of television and mass media. "I wanted to explore," she wrote, "the possibili­ties of a two-way system of manipulation, an attempt at 'talking back' to the media."#

For her Pop-Pop Video series, first exhibited at the Kitchen in New York in 1980, Birnbaum edited together disparate broadcast footage into fast-paced, single-channel videos that offer "a view of the totally homogenous nature of 'TV-treatment.'"# General Hospital / Olympic Women Speed Skating (1980) formally connects the crossover technique used by speed skaters to build power with the reverse-angle shots employed during an emotional conversa­tion between a male doctor and a female patient on the daytime soap General Hospital. The unlikely and humorous combination of women's physical prowess and staged emotional distress points to televisual modes of heightening drama. Kojak/Wang (1980) crosscuts sequences from the popular crime show Kojak with a commercial for the technology company Wang Laboratories in order to relate the violence of a rapid gunfight to the onslaught of colorful rays coming from a computer monitor. In these videos, Birnbaum selected paradigmatic televi­sion segments and used the formal devices of television—including repetition, framing, intercutting, and slow motion—in order to reveal a common world of power, competition, drama, and violence. 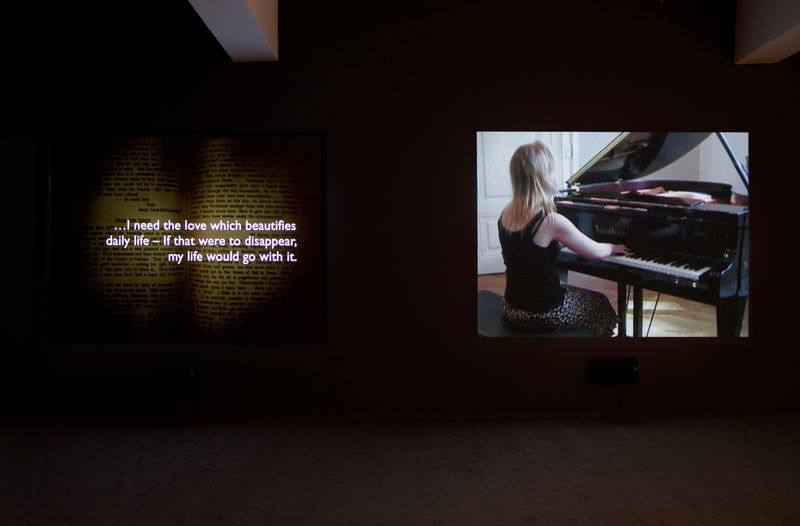 Arabesque (partial view), 2011
Courtesy of the artist and Marian Goodman Gallery, New York. Installation view, Marian Goodman Gallery, image courtesy of the artist and Marian Goodman Gallery
In the ensuing years, Birnbaum has contin­ued her critically informed multimedia artistic practice, expanding its sources, targets, and physical presence. Her four-channel video projection Arabesque (2011) reflects on the unequal legacy of two piano composi­tions by the married composers Robert and Clara Schumann. Birnbaum culled performances of Robert's Arabesque op. 18 and Clara's Romanze 1, op. 11, from YouTube. (This was her first foray into this media platform.) Using multiple large-scale projections in the installa­tion, she juxtaposes these clips with still footage from a 1947 film about the Schumanns, Song of Love, which tellingly features Robert's Arabesque. Birnbaum's evocative piece traces the lopsided estimation of the masterpieces by the two composers while also exploring the redistribu­tion of Arabesque via the efforts of countless musicians to master it. Birnbaum says, "The more the viewer is exposed to the masterwork (the Arabesque masterpiece), the more it becomes neutralized by the diverse range of musicians attempting to reach for it."#

Birnbaum draws on the mass media's reservoir of images and of image manipulation techniques to create video works and video installations that activate her own and her viewers' relationships to the seductive and alienating realm of mass media. Craig Owens perceptively wrote of the ambivalence in these relationships: "We are fascinated and at the same time critical of our fascination—even when our critical attitude functions only as an alibi."#