For my house to function, I demand as my primary duty that I be a phony, that I not exercise my revolt and my love, both set aside. If I am not a phony, my house trembles. I must have forgotten that beneath the house is the land, the ground upon which a new house might be erected. Meanwhile we sleep and falsely save ourselves.#
—Clarice Lispector

The Brazilian Portuguese word sonsa is used mainly to describe someone who is a phony, who plays dumb. In the chronicle "Mineirinho," published in 1964, Clarice Lispector recounts the epic demise of a young man executed by thirteen shots fired by a police death squad.# The despair over the execution of the bandit becomes, in Lispector's text, an interplay of inversions and tensions suggestive of a possible female condition: the obligation not to enact one's rebelliousness or love.# Pretending is what allows the walls of the house not to tremble. Lispector knows, though, that those walls will not withstand the first gust of wind and that the locked door will go flying through the air. Years have passed, and the wind has torn off some doors. But the situation of women in Brazil is still beset by inversion and tension, and this pretending—this act of playing dumb—still helps to prop up so many houses built on rotten foundations.

The women artists whose work is discussed in this essay stopped pretending and in many cases instead shouted their truths to the four winds. They not only eschewed their passive role but also answered with vehemence. In the 1980s the poet Ana Cristina César responded to criticism from Heloísa Buarque de Hollanda, who had questioned the femininity of the title of her book Luvas de pelica (Chamois gloves) with a parable: "With complete disregard for the physiological truth, the egg is said to lie still, awaiting the sperm's boisterous and courageous performance in order to be fertilized. No one mentions the egg's long, dangerous, and solitary journey down obscure tunnels."# In writing about unspoken truths regarding female biology, César addresses the flawed anatomical argument for the eternal confinement of women. The poet also affects a reversal that renders explicit a female subjectivity (and biology) that everyone knows to be gender specific. Almost twenty years separate Lispector's text from César's. Lispector already speaks of a vital force, one shapeless and indeterminate, that emerges from an archaic and basic human substrate; the young poet uses a biological metaphor to address femininity, the image of the egg functions as a stand-in for a solitary woman traveling through the darkness.

The works by the artists analyzed here were created over the course of twenty-one years of dictatorship in Brazil (1964–85; fig. 1).# As women these artists were oppressed by both patriarchal society and military power. Their radical proposals contested naturalized power imbalances with regard to gender relations and in the broader realm of a repressive society, tying their responses to questions of ethnicity and class. Women artists have been active in Brazil since the end of the nineteenth century and were crucial to the advent of late modernism in the country, but it was not until the 1960s that their production reflected self-awareness in relation to questions of identity.# The process of modernization that began in the 1950s prepared the field of action for women with the expansion of the education system and, with it, the job market, facilitating the cultural upheaval of the 1960s, which had a profound effect in both the public and private spheres. Women began questioning prohibitions related to sexuality, family, and political participation. 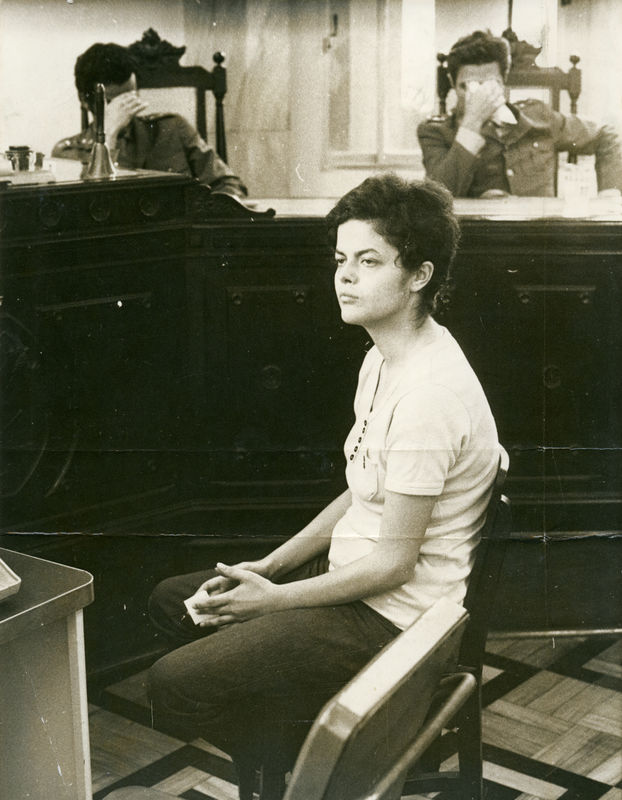 Fig. 1. Dilma Rousseff at the military audit headquarters, Rio de Janeiro, November 1970. Officers questioning her about her participation in the armed struggle conceal their faces with their hands.
Courtesy of Arquivo Público do Estado de São Paulo. Photo by Adir Méra

Women's participation in leftist organizations meant a radical break with existing values and expectations. They not only reacted against the dictatorship but also undermined the roles and responsibilities assigned to women by society. Eschewing their traditional place, women took part in the armed struggle against the military dictatorship and engaged in what was considered "masculine" behavior, which, as Marco Aurélio Garcia describes, "became a sui generis instrument of liberation insofar as equality with men was recognized, at least on a rhetorical level."#

Concealed or locked away in homes and studios, very few works by women artists entered the canon; they were often mistaken for works by their male peers. The potential feminine power of that production lies in a strategy based on naturalization rather than on exceptionality. Like the young women militants who rebelled against the dictatorship, women artists produced their works not because they were women but in spite of their gender.

Starting in the 1960s, artists such as Claudia Andujar, Vera Chaves Barcellos, Lygia Clark, Anna Bella Geiger, Lotus Lobo, Lygia Pape, Celeida Tostes, and Regina Vater—most of whom came from middle-class intellectual backgrounds—attempted to approach or join with minorities, who were not yet called minorities but who nevertheless occupied marginalized spaces. For them the choice to seek out the margins—a choice shared by fellow members of their generation—provided a way out of the normalized and suffocating gender-specific milieu imposed by society. They boldly made their way into places where they were not supposed to be. They frequented Indian reservations, escolas de samba (samba schools), and places of Afro-Brazilian worship; they took sambistas (samba dancers), pivetes (homeless youths), Indians, blacks, homosexuals, and transvestites to Aterro do Flamengo, museums, and Parque Municipal in Belo Horizonte. They cross-dressed, dressed up, or donned disguises. They let their vital drives express themselves and advocated a poetics and politics of the body that culminated in celebration, dialogue, communion, and grieving.

As if they were discovering a new world and by transforming themselves or occupying unknown bodies, some artists built objects and installations in which they performed acts simulating sexual penetration or childbirth. They fucked, took pleasure, gave birth to themselves, and offered viewer-participants roles in those experiences.

The Scuderie Le Cocq was created to avenge the death of Milton Le Cocq, a famous detective who had been one of President Getulio Vargas's bodyguards. Over time the Cocq became an association with some seven thousand members and admirers. It was led by twelve famous police officers chosen by the secretary of security of the city of Rio de Janeiro assigned the task of exterminating bandits like Cara de Cavalo, Mineirinho, and many others who were murdered in their communities in order to set an example. Elio Gaspari, A ditadura escancarada (Rio de Janeiro: Intrínseca, 2014), 319.

A military coup that took place on April 1, 1964, ushered in a civilian-military government that, by means of repression and censorship, would stay in power until January 15, 1985, when the electoral college chose congressman Tancredo Neves as the new president of the republic. Tancredo Neves formed part of the Alianza Democrática, an opposition group formed by the Partido do Movimento Democrático Brasileiro and the Frente Liberal.