See all works by William Pajaud

Best known for his vibrant, celebratory water­colors, William Pajaud always looked to his ethnic and cultural backgrounds for inspi­ration in his work, which features images of full-figured, powerful African American women, jazz funerals, street scenes, and other imagery from his childhood in New Orleans and his adult life in Los Angeles.

Pajaud knew he wanted to be a painter from a young age. When he was twelve, he painted his first watercolor, a picture of the windmill that appeared on Old Dutch Cleanser cans. Watercolor became his preferred medium. After the ninth grade, Pajaud moved with his mother, a social worker, to Chattanooga, Tennessee, where he was sub­jected to several racially motivated incidents, including being seriously beaten for waving at a car with white passengers. A year later, when his mother joined the faculty of Texas College, they moved to Tyler, Texas, where Pajaud experienced another racist attack, this time being thrashed with a rope. In 1960 Pajaud's father, a musician, died while on his way to play music for a jazz funeral in New Orleans. These experiences had a pro­found influence on the artist. He once stated, "The awareness and acceptance of human­kind—universal, flowing life's awesome rhythms with dignity in pain, joy, poverty, and often jubilation—cause me to paint. My pri­mary need is to show my gut reaction to man's coping with the cycles of life and death."#

Pajaud earned a BFA at Xavier University in New Orleans. He then spent time in Chicago before moving in 1948 to Los Angeles, where he enrolled at Chouinard Art Institute. While working at various jobs, including as a depart­ment store clerk, a janitor, a postal worker, and a position for which he used aniline dyes to paint the undergarments on a live model, he continued to produce paintings and prints, creating a substantial body of work. Pajaud exhibited at the Heritage Gallery, the Santa Barbara Museum of Art, and Esther Robles Gallery, and was also active in the Los Angeles arts community, participating in the short-lived co-op Eleven Associated. Members of the col­lectively run space included Beulah Woodard, Alice Gafford, and Tyrus Wong. Until the early to mid-1960s, Pajaud painted mostly land­scapes and marine scenes in a style that reflected his interest in Asian art and experi­ence working with Wong in Eleven Associated. 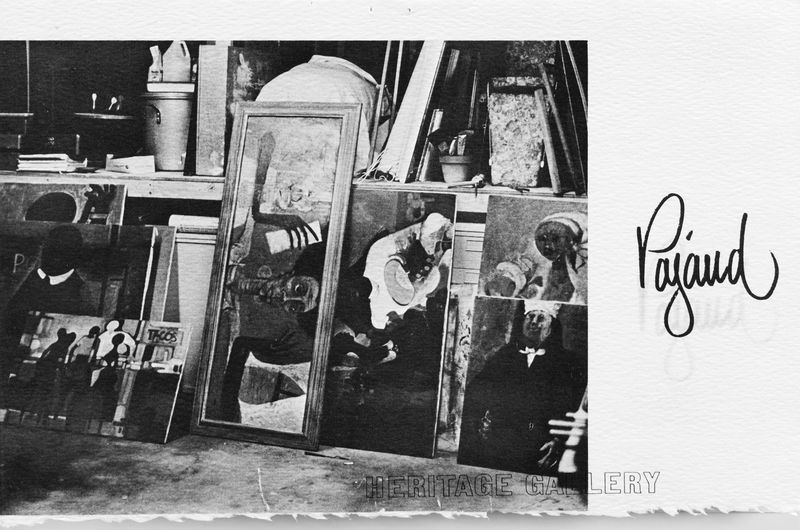 A turning point in Pajaud's career occurred in 1957, when he was appointed an art director at Golden State Mutual Life Insurance Company, one of the largest black-owned insurance firms in the country. Originally hired to design the company's print material, he later proposed that Golden State begin collecting work by African American artists, launching an ongoing dedication to nourishing and supporting the careers of many Los Angeles black artists that came to signify the progressive thinking behind the company. Through Pajaud's curatorial efforts, Golden State built a nationally recog­nized collection, including works by Richmond Barthé, Romare Bearden, John Biggers, Eliza­beth Catlett, Jacob Lawrence, Samella Lewis, Betye Saar, Henry Ossawa Tanner, Charles White, Hale Woodruff, and Pajaud himself. By the time Pajaud retired from the company in 1987, he had overseen the acquisition of more than 250 works.

William Pajaud biography at The HistoryMakers.