Kahlil Joseph creates films and video installations that disrupt linear narratives with a unique treatment of both sound and music used as materials to generate lyricism and complexity. In addition to his artistic practice, Joseph currently serves on the board of The Underground Museum alongside his family, carrying on the vision of his brother, the late Noah Davis.

Joseph’s current focus is the ongoing enterprise BLKNWS®, an artwork and a conceptual business project. Originally conceived as a television program, BLKNWS® operates under the unique practice of “conceptual journalism” to present an uninterrupted, highly curated broadcast that highlights the vastness of the Black experience with sources from social media, popular culture, and actual news footage. During Made in L.A. 2020, two-channel video presentations of BLKNWS® are being hosted in satellite sites across the city—predominantly in Black-owned businesses such as barbershops and cafés and in other sites of community gathering, as well as in commercial hubs and healthcare facilities—and are anchored by a large-scale projection at the Hammer Museum. Breaking from exhibition conventions, in which an artwork might remain unchanged during the run of the show, a team of BLKNWS® editors and contributors constantly work to remix and update the broadcast in real time, pushing new programming to all satellites throughout the exhibition to create a fugitive network that upends established media expectations and calls into question what we deem to be newsworthy and authoritative.

The citywide presentation of BLKNWS® is coproduced by the Hammer Museum and LAND (Los Angeles Nomadic Division) for Made in L.A. 2020. Major support is provided by Aubrey Drake Graham.

Production support for this presentation of BLKNWS® is provided by Apple Music.

In Made in L.A. 2020: a version, the artist’s work is present in two institutions, across Los Angeles. See Kahlil Joseph's work on view at The Huntington. Kahlil Joseph was born in 1981 in Seattle. Early on, he earned his spurs working for the photographer Melodie McDaniel and the movie director Terrence Malick. Joseph creates films and video installations that disrupt linear narratives with a particular treatment of music, used both as a material and as a model of lyricism and complexity. Joseph’s practice scrambles the conventional approach to and understanding of video: his films quote the likes of Andrei Tarkovsky and Chris Marker and feature pop culture icons and underground heroes alike. Joseph’s current focus is the ongoing project BLKNWS®, an artwork and functioning business established as a way to redefine how Black culture is experienced, viewed, and communicated. BLKNWS® starts from the postulate that anything can be “news” that is new to someone. Originally conceived as a television program, it presents an uninterrupted—though highly edited—stream of images focusing on African American life, including YouTube videos, amateur film footage, internet memes, Instagram stories, and actual news clips. The work operates through a network of highly skilled editors and fugitive journalists—constantly updating the stream—whom Joseph hires and supports, forming a sort of BLKNWS® academy that reflects his interest in community-driven process. Joseph’s work with BLKNWS® was included in May You Live in Interesting Times at the 58th Venice Biennale (2019) and in the Biennale de l’Image en Mouvement, Geneva (2018). His short film Fly Paper debuted as part of his 2017 solo exhibition at the New Museum, New York. Other exhibitions include those at Bonnefantenmuseum, Maastricht, Netherlands (2017); Frye Art Museum, Seattle (2016); and Museum of Contemporary Art, Los Angeles (2015). Joseph currently serves as the creative director of the Underground Museum alongside his family, carrying out the vision of his brother, the late Noah Davis. 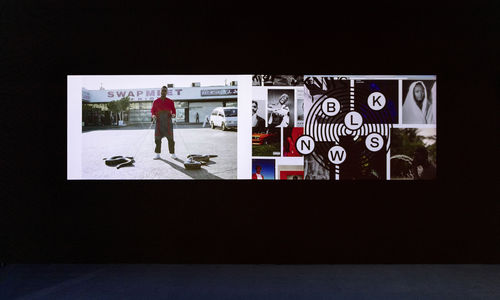