Francis Upritchard’s discovery of the rubber-like material called balata was happenstance. While in Belem, Brazil for a residency in 2004, she stumbled upon balata figurines at an outdoor market. The material, the figurines, and the seller intrigued her. Mr. Darlindo, the artisan and seller with whom Upritchard struck up a conversation, invited her back to his studio for a lesson.  After a brief stint working alongside Darlindo at his home, Upritchard—ever on the look-out for new materials with which to experiment—saw potential in the unique substance. Darlindo collected balata for Upritchard and shipped it back in 1 kilogram blocks back to her studio in London. In all, he sent a total of 10 kilograms to the artist.

Although the byproducts of the Manilkara tree—balata, fruit, and the wood itself—had long been utilized by South Americans, the industrial uses of balata were only discovered by Europeans in the mid-19th century. In England, balata was displayed alongside Indian rubber at the International Exhibition in South Kensington, London in 1862. And after the material’s London debut, it was soon incorporated into machine belting and cable insulation (such as the telegraph cables that crossed the Atlantic in the mid-19th century). The multiple commercial uses for balata put it in high demand, creating a burgeoning market in both England and continental Europe for the rubbery substance. Large corporations hired locals to collect the raw balata from Manilkara trees. These “collectors,” as they were called, travelled by canoe into densely forested areas to slice the trees and collect the gooey matter. By the 1950s, industrial demands for balata all but diminished because of the invention of polyethylene (plastic). And yet, as Upritchard discovered during her time in Brazil, balata is still collected and used by local artisans like Darlindo. Upritchard admits being equally fascinated by the material’s local artisanal history as the monsters and mythological creatures made into figurines and sold by Brazilian artisans.

Balata becomes leathery and tough at room temperature, only softening again when heated. As such, the material poses an “interesting challenge,” as it requires Upritchard to work very quickly and in unusual conditions. The first step in the process of sculpting with balata is to heat the material in water in a large pot. Once it reaches a workable consistency, Upritchard transfers the material to a cold water bath. While submerged under water, the balata slowly hardens, allowing the artist to mold the now flexible material with her bare hands. In contrast to the polymer clay Upritchard used to create the figures on view in Hammer Projects: Francis Upritchard balata behaves in an “unruly” manner, as Upritchard put it. The balata folds and bends easily while soft thus Upritchard’s task—to work the material into forms that correspond to the ideas she’s rendered in watercolor—is somewhat trying. 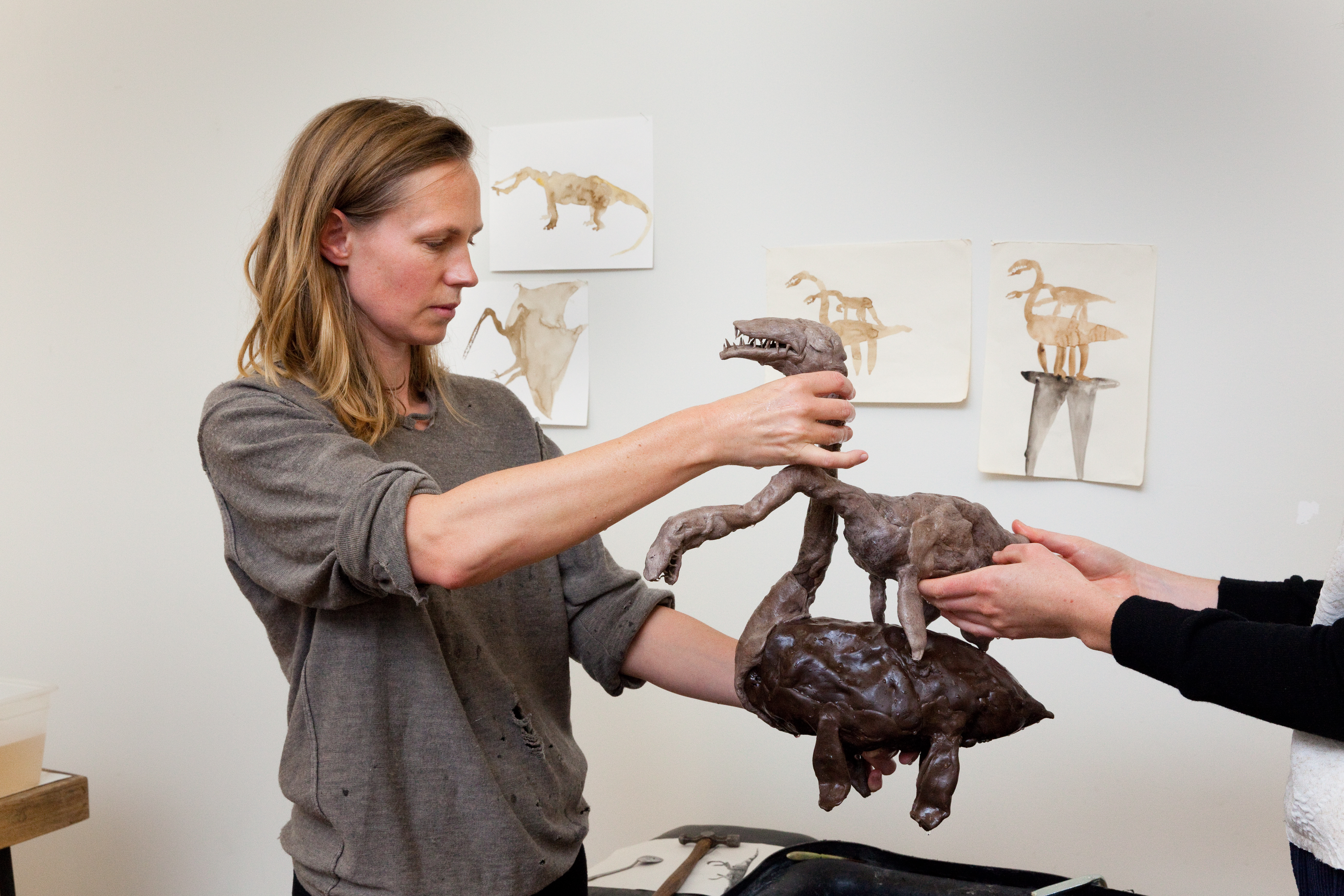 It could be argued that material always dictates the final form a sculpture takes, however, the unpredictability and “unruliness” of balata played a particularly important role in determining the shapes and attributes of the dinosaurs on display in Upritchard’s Hammer project. For example, Chubby Dinosaur was a happy accident that resulted in a voluminous creature with a flipper for a tail. Rather than scrap it, Upritchard welcomed the unusual-looking dinosaur, stating that “no one really knows exactly what dinosaurs looked like anyway.”  Marks left from pinching or squeezing the balata into snouts, feet, bodies and even little teeth and claws are reminders of the process of making Chubby and the other balata dinosaurs currently on view in the lobby gallery.  When I asked Upritchard why dinosaurs, she replied, because they leave so much to the imagination and because “people love them.” Because no one really knows what dinosaurs actually looked like they are ripe for artistic interpretation. But, Upritchard doesn’t completely abandon the scientific method altogether rather she relies upon books, renderings, and the internet before making preparatory drawings. Drawing, in fact, is a key part of Upritchard’s process, allowing her to tryout unexpected configurations such as stacking dinosaurs on top of one another, as with Piled Flipper Dinosaurs. Upritchard intended on making several piled sculptures, but in the end, the “unruly” balata dictated otherwise…

All photographs of Francis Upritchard’s studio were taken by Angus Mills and commissioned by the Whitechapel Gallery, London.