Sunday Sep 22, 2019 7:00 PM This is a past program
The UCLA Film & Television Archive presents classic film and contemporary cinema in the Hammer's Billy Wilder Theater. Archive tickets are $9 general admission and free for UCLA students.

Part of Forbidden Fruit: The Golden Age of the Exploitation Film.

After a warning to the ladies about today’s modern “super peeper,” this short purports to reveal the educational power of candid cameras. Unawares in her bedroom, Elaine Barry Barrymore, the fourth and final wife of John Barrymore, demonstrates the correct method of disrobing as compared to the comic fumblings of former vaudeville star Trixie Friganza. (1938, dir. Dwain Esper, DCP, black and white, 15 min.)

When the Legion of Decency condemned Child Bride for its “sensual presentation of sordidness, suggestive sequences…and indecent costuming,” it may have had a point. Shirley Mills made her feature debut at the age of 12 as Jennie, a mountain ragamuffin and pre-adolescent object of desire for the men of her isolated town who have, by consensus, declared her “the prettiest young’un in the community.” A crusading local teacher, moonshiners, and a mob of backwoods thugs all clash in the course of events as a consequence. Child Bride claims the mantle of progressive reform—raising the age of consent in the Appalachians—while the director takes every opportunity, including a notorious skinny dipping sequence, to present Mills as an object of desire for his audience, as well. (1938, dir. Harry Revier, DCP, black and white, 62 min.)

Brace yourself. After a standard wringing of the hands over venereal disease, Sex Madness is a sizzle reel of show girls, champagne, moral hypocrisy, and innuendo until suddenly it’s not. After an astonishingly naive show girl puts her trust in the wrong smooth talker doling out champagne and catches a dose of syphilis, a doctor takes her on a tour of the hospital’s VD ward. A graphic montage of advanced symptoms follows later, after she becomes pregnant, by a grim parade of similarly affected infants. No degree of ironic viewing will spare you. (1938, DCP, black and white, 59 min.) She Shoulda Said 'No!' / Narcotic / Marihuana 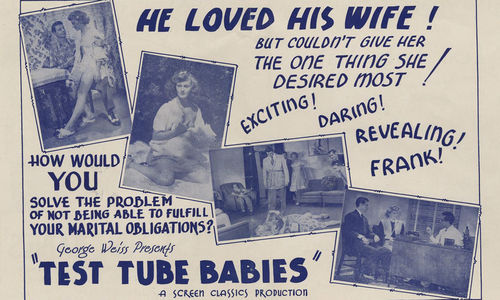