Friday Jul 12, 2019 7:30 PM This is a past program
The UCLA Film & Television Archive presents classic film and contemporary cinema each weekend in the Hammer's Billy Wilder Theater. Archive tickets are $9 general admission and free for UCLA students.

This is the greatest movie you’ve never seen about a 30-year-old teenager who wears dinosaur pajamas while battling a satanic demon named Virgil. Don’t Panic is one of dozens of Mexican horror movies from the late 1980s that transformed familiar American tropes into beautiful abstractions. Using A Nightmare on Elm Street and Saved by the Bell as jumping off points, this movie has an awe-inspiring ignorance of its own flaws. Deny all forms of human logic and catch a wave on Don’t Panic—your one-way passport to la muerte de su cerebro. (1988, dir. Rubén Galindo Jr., 35mm, color, 90 min.)

Part of the series Catch a Thrill! Celebrating 10 Years of the American Genre Film Archive 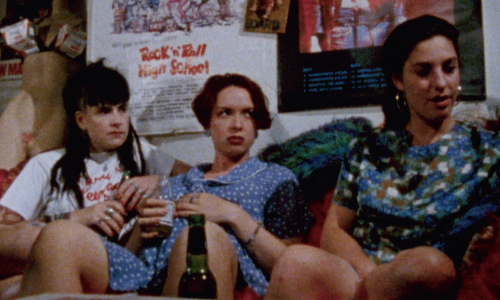 Nude on the Moon / Smut without Smut: Bizarro Horror Nite