Mathias Poledna was born in 1965 in Vienna and has lived in Los Angeles since 2000. His work often takes the form of highly sophisticated films that betray a tension between the visuals presented and their cultural and political implications. Entertainment and its production are key subjects for Poledna as he focuses on the forms and materials that capture the imagination and illustrate societies to themselves. In all of his works the detail and precision of the images are seductive as they, in a sense, explore artifice through artifice. Although invariably newly produced, they often create the impression of having been found as they are, seemingly extricated from present-day or historical collective memories.

Poledna’s film Indifference unfolds as a series of brief, hallucinatory scenes set in the waning days of the Austro-Hungarian monarchy and on the cusp of World War I. Broadly, the film details with elegant restraint the seemingly mundane routine of a single protagonist played by the French actor Alain-Fabien Delon. His character—an aristocratic Austrian officer—is drawn from types common in fin-de-siècle literature as well as from historical dramas and period films produced in the Cold War era. While evocative of the larger backdrop of traumatic modernization and imperial dissolution in early twentieth-century Europe, Poledna’s film forgoes a broader narrative, focusing instead on the transient and the disjointed. Intimating the aesthetics of surface, kitsch, and melodrama, the work purposely fuses historical specificity with a sense of ambiguity. Shot on location in Paris, it employs particular sites—the Jardin du Luxembourg and its romantic baroque Fontaine Médicis—as stand-ins for places in historical Habsburg Vienna. Following a common thread in Poledna’s film work, Indifference draws from contiguous art practices such as painting and literature, as well as from popular culture, in particular explorations of history in genre and auteur cinema.

At the suggestion of the artist Indifference is presented identically in both locations of Made in L.A. 2020, each amounting to a double of the other, inviting memory, repetition, and the particular context of each venue to permeate the experience of the work.

In Made in L.A. 2020: a version, the artist’s work is present in two institutions, across Los Angeles. See Mathias Poledna's work on view at The Huntington. Mathias Poledna was born in 1965 in Vienna. He studied at the Universität für Angewandte Kunst and the University of Vienna before moving to Los Angeles in the 1990s. Poledna’s work often takes the form of highly sophisticated films that betray a tension between the visuals depicted and their cultural implications. Entertainment is a key subject for him: he focuses on the visual and structural elements that capture the imagination and illustrate societies to themselves. In all his works the detail and precision of the image are seductive; in a sense he uses artifice to discuss artifice. In some of his more recent productions, he employs the allure of Hollywood’s studio system as a hook, from 1930s black-and-white musicals to golden-era animation. The latter makes up the work Imitation of Life (2013), a three-minute hand-drawn animated film using more than five thousand drawings, sketches, and watercolors from original Disney animators. Poledna has had solo exhibitions at the Renaissance Society, University of Chicago (2014); Art Institute of Chicago (2014); Secession, Vienna (2013); Portikus, Frankfurt am Main (2010); New Museum of Contemporary Art, New York (2009); Bonner Kunstverein (with Christopher Williams, 2009); Hammer Museum, Los Angeles (2007); and Witte de With Center for Contemporary Art, Rotterdam (2006). His work has been shown in group exhibitions at the Whitney Museum of American Art, New York (2016); Museu d’Art Contemporani de Barcelona (2009); and Museum of Contemporary Art, Los Angeles (2008), to name a few. In 2013 he represented Austria at the 55th Venice Biennale. 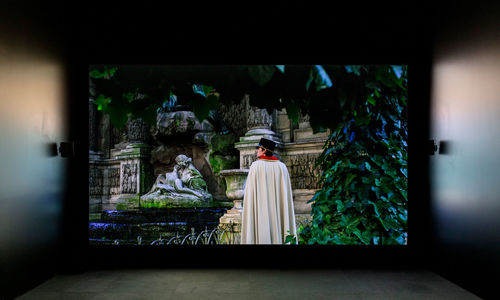