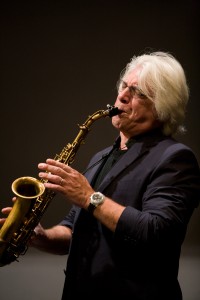 Aram Shelton, an energetic musical presence in the San Francisco Bay Area, imports some of his longtime collaborators from the Chicago scene Keefe Jackson (tenor saxophone), Anton Hatwich (bass), and Tim Daisy (drums), for a rare West Coast performance. Shelton’s music for this quartet—while influenced by innovative masters like Ornette Coleman, Eric Dolphy, and the Art Ensemble of Chicago—is uniquely his own, an extension of a tradition that embraces lyricism and freedom.

Lisa Mezzacappa is a San Francisco-based bassist, composer, and musical instigator. An active collaborator and curator in the Bay Area music community, she leads her own groups Bait & Switch and Nightshade, and co-leads the collectives duo B., Cylinder and the Oakland Active Orchestra. She collaborates frequently on cross-disciplinary projects in sound installation, digital poetry, film, sculpture and public music/art. Mezzacappa has performed at countless Bay Area venues including Intersection for the Arts, Yerba Buena Center for the Arts, SFMOMA, Yoshi's, and the de Young Museum, San Francisco; as well as the Earshot Jazz Festival, Seattle; and the Montreal Jazz Festival; Canada. She also programs music series in Oakland, San Francisco and at Stanford University.

KJAZZ 88.1 is the official media sponsor for this series.