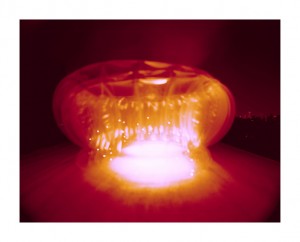 The Hammer recently added Hirsch Perlman’s 2007 photograph Operation Idiocracy, Roll 3, Frames 3/4, to the Hammer Contemporary Collection. For this series, Perlman created pictures documenting isolated explosions of his own making on his Los Angeles rooftop. This image was shot on one of the last few nights that he still had a rooftop studio (his landlord evicted him soon after). Only two in the series of roughly 30 black-and-white images are from actual “rooftop” negatives; the rest were shot after he moved the project indoors. Perlman colorized only two images in the series (all the negatives are b/w), which he printed himself in a larger format that he hoped would “accentuate the ‘cartoonyness.’ They seem to be blobs, things from outer space, as much as they might be explosions.”  The images recall the iconic photographs of scientific experiments by Harold Edgerton, but Hirsh’s “experiments” are clearly more homespun, and somewhat absurd.

Perlman’s work will be featured in the upcoming exhibition Nine Lives: Visionary Artists from LA opening March 8, 2009.  He also serves on the faculty of the UCLA Art Department as professor of sculpture, and is a member of the Hammer Artists Council. His works have been exhibited widely, both internationally and nationally, including at the Drammens Museum, Norway; The Museum of Modern Art, New York; and The Renaissance Society, Chicago.

The Hammer Museum is deeply grateful to the following individuals, foundations, and corporations for their gifts/promised gifts/pending gifts of art as well as acquisition funds since July 1, 2008 for the Hammer Contemporary Collection and the Grunwald Center for the Graphic Arts.

The Andy Warhol Foundation for the Visual Arts

Joni Weyl and Sidney B. Felsen

The Museum also thanks the members of the Hammer Board of Overseers, who have supported the Hammer Contemporary Collection since its inception, and the Friends of the Graphic Arts, whose dues support Grunwald Center acquisitions. 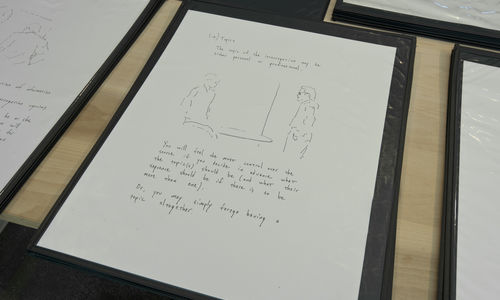