Three short films directed by artist Yael Bartana, screening in the Hammer’s Billy Wilder Theater for a limited time in conjunction with the exhibition Witch Hunt.

The starting point of Inferno (2013) is the construction of the third Temple of Solomon (Templo de Salmão) in São Paulo by a Brazilian Neo-Pentecostal Church. Built to biblical specifications, this new temple is a replica of the first temple in Jerusalem, the violent destruction of which signaled the diaspora of the Jewish people in the 6th century BCE. Inferno confronts this conflation of place, history, and belief, providing insight into the complex realities of Latin America that have given rise to the temple project. Yael Bartana’s film employs what the artistrefers to as “historical pre-enactment,” a methodology that commingles fact and fiction, prophecy, and history. Her work addresses the grandiose temple project through a vision of its future: Does its construction necessarily foreshadow its destruction? Using a powerful cinematic language, Inferno collapses histories of antiquity in the Middle East with a surreal present unfolding halfway around the world.

Yael Bartna’s The Undertaker (2019) chronicles an enigmatic leader and her armed followers during a choreographed procession and burial of weapons. Philadelphia, the birthplace of American democracy, plays a prominent role as this group of dancers, war veterans, and activists from a variety of local communities moves across the city’s charged historical landscape. Their procession and slow, deliberate gestures are grounded in the movements of Israeli dance composer Noa Eshkol (1924–2007), particularly her 1953 ceremonial performance in remembrance of the Holocaust. Rather than a memorial to the dead, the film’s symbolic burial is a monument for the living, an invitation to consider our bodies as both carriers of trauma as well as vehicles for hope and resistance.

Yael Bartana’s Tashlikh (Cast Off) (2017) serves as a platform for both perpetrators and survivors of various genocides or ethnic persecutions—the Holocaust, the Armenian Genocide, as well as Sudanese and Eritrean ethnic cleansing or civil wars—to confront their personal material links to the horrors of the past. For this project, a filmic meeting point was created in which peoplesymbolically rid themselves of objects that have survived the traumas of genocide. Inspired by the Jewish custom of Tashlikh, where casting bread or other objects into a river symbolizes a relinquishing of sins, Bartana’s work generates a new ritual that consists of the deliberate discarding of objects as a means of psychological liberation. The Undertaker (2019, color, 13 min)
All public programs are free and made possible by a major gift from an anonymous donor. Generous support is also provided by Susan Bay Nimoy and Leonard Nimoy, Good Works Foundation and Laura Donnelley, the Elizabeth Bixby Janeway Foundation, The Samuel Goldwyn Foundation, an anonymous donor, and all Hammer members.
Readings are supported by GRoW @ Annenberg.
Digital presentation of Hammer public programs is made possible by The Billy and Audrey L. Wilder Foundation.
Hammer public programs are presented online in partnership with the #KeepThePromise campaign—a movement promoting social justice and human rights through the arts.
Image Gallery
Get Our Newsletter 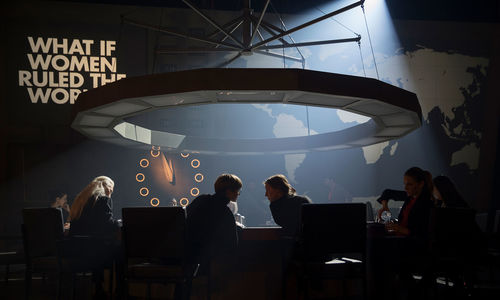