The Mad Men of Midcentury Modernism

Modern architecture and design succeeded both because of the deliberate commercial strategies used to advocate for them—efficiency, power, and style—and through the subtler associations made between modernity, sexiness, and glamour in advertising, television, and film.

This series of six talks ties together themes of public and private real estate development in Southern California.

Donald Albrecht is has curated exhibitions that have ranged from overviews of cultural trends, including World War II and the American Dream and Green House: New Directions in Sustainable Architecture and Design for the National Building Museum, the National Design Triennial for the Cooper-Hewitt National Design Museum, and Paris/NewYork: Design Fashion Culture, 1925–1940 for the Museum of the City of New York, to profiles of individual design firms and artists—The Work of Charles and Ray Eames for the Library of Congress and Vitra Design Museum, Eero Saarinen: Shaping the Future for the Finnish Cultural Institute, the Museum of Finnish Architecture, and the National Building Museum, and The High Style of Dorothy Draper for the Museum of the City of New York.

For most exhibitions, Mr. Albrecht also develops and edits the catalogs, contributing major essays and working with other writers to provide fresh critical perspectives. His catalogs have garnered numerous awards, including the Society of Architectural Historians’ Best Exhibition Catalogue for the Eero Saarinen and the Eames catalogs. Mr. Albrecht has also contributed essays to a number of books about architecture and design, including The Glass House: Pairings and California Design: The Legacy of West Coast Craft and Style to monographs on Andree Putman, Michael Gabellini, and 1100 Architect, and has written extensively about the relationship between architecture and film, starting with his seminal book, Designing Dreams: Modern Architecture in the Movies.

Design Strategies for Better Living is presented as part of Pacific Standard Time Presents: Modern Architecture in L.A. This collaboration, initiated by the Getty, brings together seventeen local cultural institutions from April through July for a wide-ranging look at the postwar built environment of the city as a whole, from its famous residential architecture to its vast freeway network, revealing the city’s development and ongoing impact in new ways. 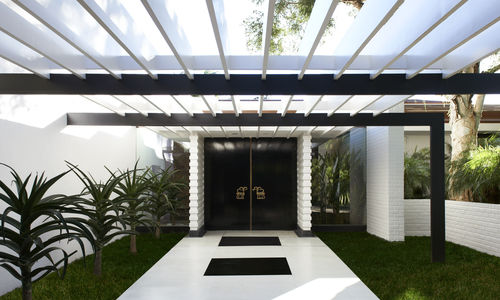