Mercedes Dorame uses photography as a way to explore, reimagine, and connect to her Gabrielino-Tongva tribal culture and bring visibility to contemporary indigenous experience. The Tongva were the first people in what is now Los Angeles, and their territory covered the expanse from Malibu to San Bernardino to Aliso Creek. They have inhabited the Los Angeles basin for over eight thousand years and were officially recognized as an indigenous tribe by the state of California in 1994. Yet they still are not recognized federally, which means that as a collective group they have limited access to federal funding and no designated reservation land.

For Made in L.A. 2018, Dorame has intertwined two bodies of photography and created a sculptural installation. The first series centers on her non-Native American grandparents’ home in the hills of Malibu, where she spent a great deal of her childhood. She activates this site, which was originally Tongva land, using organic materials, such as sage, ochre, cinnamon, feathers, quartz, and the skins of coyotes and foxes—materials that are traditionally used in ceremony and ritual—to create moments of vitality. Her second series of photographs documents her time as a cultural resource consultant. Cultural resource consultants are Native people hired to identify and sometimes remove artifacts, materials, and even mass burial sites in areas that are in the midst of construction and development. Dorame has often worked in this capacity with her father, who is a prominent elder in the tribe (pictured on the right in My Relatives I Sing for You—Nehiinkem, Če’ee’axre).

The sculptural installation Orion’s Belt—Paahe’ Sheshiiyot—a map for moving between worlds features several cog stones that Dorame recreated based on her experience with artifacts found on a sacred site that was being developed. The original artifacts are projected to be around 75,000 years old and they have been found in Los Angeles and Northern Orange County. Dorame employs these cog stones as symbolic ceremonial objects, as stars in constellations meant to create maps to move between worlds. Using the constellation Orion, which marks due west as it sets, Dorame has created a way for her ancestors who have been disturbed and unearthed by developers to ascend into the sky and rest once again 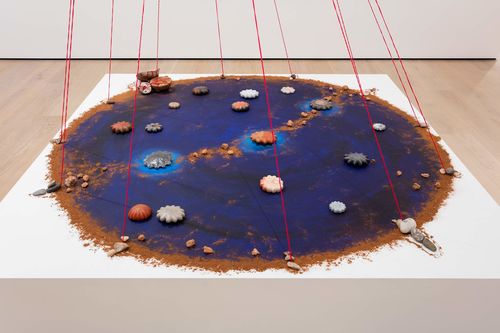