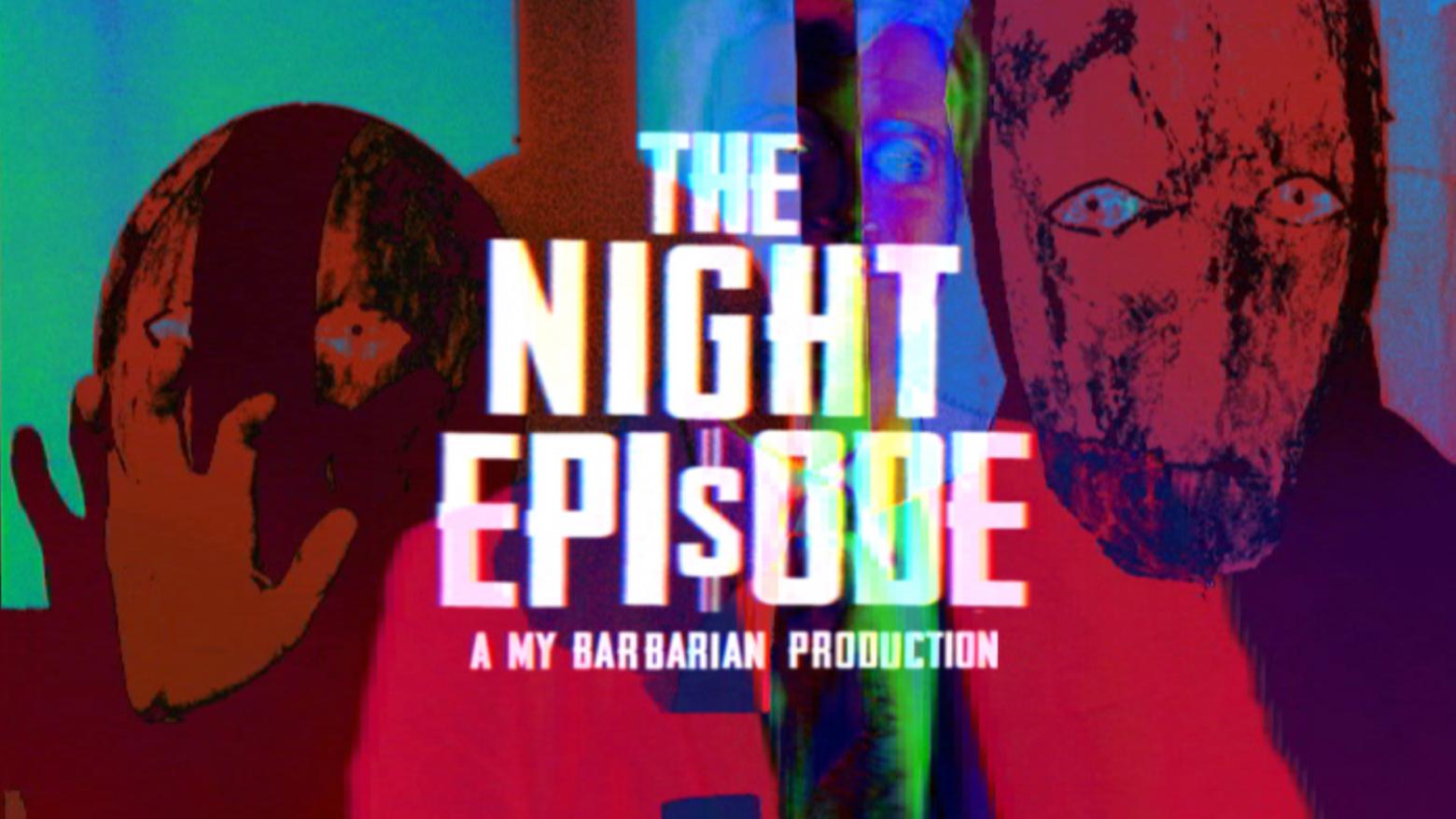 My Barbarian is a Los Angeles-based performance collective founded in 2000 by Malik Gaines, Jade Gordon, and Alexandro Segade. Their video installation The Night Epi$ode (2010) explores the genre of science fiction, linking narratives related to the economic collapse with supernatural occurrences. Inspired by episodic television shows like Rod Serling’s Night Gallery, the three performers appear in six short videos that view the current financial crisis through the tropes of that genre. In The Night Epi$ode, a woman starts a romance with a supernatural being after losing her job, a man turns to witch doctors when his insurance won’t cover his medical condition, and a trio of curators trapped in a board room argue over the politics of art. Combining science fiction with elements of French existentialism and absurdist dialogue, My Barbarian’s lively performative videos comprise a multi-part installation. My Barbarian is a Los Angeles-based performance collective founded in 2000 by Malik Gaines, Jade Gordon and Alexandro Segade. My Barbarian has performed and exhibited at venues such as the Los Angeles County Museum of Art, Hammer Museum, Museum of Contemporary Art, and LAXART in Los Angeles, California; the Whitney Museum of American Art, New Museum, and Studio Museum in New York; and at numerous venues internationally including The Power Plant, Toronto, Canada; De Appel, Amsterdam, The Netherlands; Galleria Civica, Trento, Italy; and Townhouse Gallery in Cairo, Egypt. Hammer Projects: My Barbarian is the group’s first solo museum exhibition. 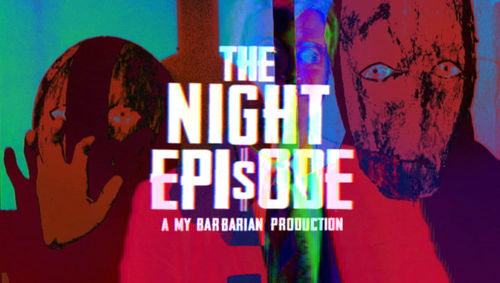 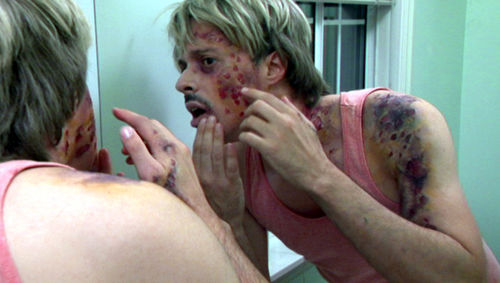 In the pilot episode of the group of videos that make up My Barbarian’s The Night Epi$ode, the three protagonists—curators who are locked in a room reviewing slides of artworks in order to select works for an exhibition—interrupt their discussion of what constitutes the most interesting and original art to ask: “Are you frightened by an unexpected knock at the door?” “Does your heart pound when you get mail from the government?” “Are you hiding something?” Tense, anxious, and weary, these three characters embody the current national, if not global, malaise that has resulted largely from the recent economic collapse and lingering recession and the innumerable repercussions of this state of intense instability.

The news lately has been full of strange stories linked to the recession: A nurse in Wisconsin was laid off while assisting during a surgery. An employee of a restaurant in Florida was ridiculed and then dismissed from his job after placing a slice of tomato on top of the meat rather than directly on the bread. Airlines have started charging for pillows and blankets, and some have even considered a fee to use the restroom. Condom sales are up as couples forsake nights on the town in favor of intimate dates at home while nonetheless trying to avoid expanding their families. Simultaneously, and ironically, rates of domestic violence are on the rise. City morgues are grappling with an increase in unclaimed bodies, as families cannot afford to bury their dead. While the general trends are the predictable outcome of a slowed economy, many of the related anecdotes sprinkled throughout the daily news are borderline surreal—like fantastical horror stories or the petty banalities of a soap opera. This confluence of real life and dreamlike parody informs The Night Epi$ode, which plays with the genre of science fiction television series by linking narratives related to the economic collapse with bizarre occurrences.

A Los Angeles–based collective founded in 2000, My Barbarian—Malik Gaines, Jade Gordon, and Alexandro Segade—create performances that draw from wide-ranging practices emblematic of both the avant-garde and popular culture to critically explore hot-button political issues—such as health care reform and its opponents assertions that it will lead to “death panels”; the charges that increased government oversight will result in “socialism”; and resistance to gay marriage—while simultaneously looking at the role of history, mythology, and art in forming our contemporary identities. Their work, in both live performance and video, is intentionally campy—full of musical numbers and flamboyant costumes—while the subjects examined are those most highly contested within our current political debate. For My Barbarian, art remains a platform to promote engagement and dialogue, a place where opinion can be shouted out (or harmonized!). Incorporating theatrical elements from numerous precedents—the experimental theater of the 1960s and 1970s, early feminist performance, underground filmmakers like Jack Smith and Kenneth Anger, musical theater, Broadway musicals, rock operas, cabaret, soap operas, horror and science fiction movies and television shows, 1980s pop music videos—their postmodern pastiche reveres and celebrates these earlier modes of expression for their radicality and intention to empower. If the ambitious objectives of some of these forms to give voice and visibility to the oppressed and enact social change often failed, My Barbarian nonetheless finds enormous value in the process. Their practice embraces and extends this potential, continuing these efforts to offer an experience outside the normative and to proclaim the potential for humanity, decency, and the acceptance of difference.

The Night Epi$ode is the first video work by My Barbarian that was conceived and produced exclusively as a gallery installation. Their previous works in video have grown out of performances and often incorporate footage from live staged events or workshops with collaborators. Starting as a six-person band in 2000 and playing venues like the Grand Star Chinese Restaurant and Spaceland in Los Angeles, My Barbarian had by 2004 condensed to a core group of three members and moved into a more multidisciplinary practice rooted in performance, with much of their work created through site-specific residencies. While the group’s primary members decreased, its commitment to collaboration and finding opportunities to develop and stage works collectively increased. My Barbarian’s interest in theater and dance exercises that foreground intuition, participation, and the breaking down of boundaries between actors and audience—such as image theater, contact improvisation, and mask performance—led them to develop their own series of workshops, which they dubbed Post-Living Ante-Action Theater, or PoLAAT, a playful nod to both Judith Malina and Julian Beck’s Living Theater in New York and Rainer Werner Fassbinder’s Antiteater, based in Munich.

Involving local participants in a number of different cities, the PoLAAT workshops revolve around the teaching of five pedagogical principles that explore the self in relationship to the legacies of the radicalism of the 1960s and 1970s and the ideals of modernism. Like the divergent precedents that they invoke, the PoLAAT workshops encompass the acting out of both the limitations and the possibilities of the theater: the alienation (the principle of estrangement) inherent to the fabricated nature of theater, for example, and the stage as a site to contemplate differing political and ideological positions (the principle of suspension of beliefs). PoLAAT workshops, usually lasting two to three weeks, develop into live performances, and it is the fourth principle—mandate to participate—that might best characterize My Barbarian’s overarching process. The theater becomes an open system with no end result, no “final act.” The performance is essentially a continuation of the rehearsal, and the audience members become participants. The result, as proclaimed in their description of the mandate to participate, is “Democracy is Alive.”1

In the six episodes of The Night Epi$ode, the fallout of the financial crisis takes on supernatural dimensions. A woman starts a romance with an alien form after losing her job and her health insurance and being dumped by her husband because of her preexisting conditions only to learn that she cannot get health coverage on her new lover’s policy because they are a same-sex couple and not allowed to marry. A yoga teacher breaks the rules of the practice to unleash a rash of toxins on her student’s skin and then sends in a witch doctor, who performs a ritual and successfully cures the ailing student but leaves an enormous bill for his efforts. Two female colleagues behave like wild animals when they learn that they have been fired, attacking and mutilating their male boss. Hilarious yet haunting, these narratives highlight how absurd and surreal our realities have become. The episodes distill and exaggerate the very things—unemployment, access to health care, economic marginalization—that keep people up at night worrying about their futures.

Through their work, My Barbarian earnestly and consistently ask what role art can play in a democratic society. In The Night Epi$ode, the economy reigns supreme as both a shared unifying experience—everyone seems to be suffering, unable to sleep, and desperate for a break—and a site of conflict and competition in which people are solely out for themselves. The pilot episode, with its jury of curators, humorously satirizes both the extreme measures that artists will take to get noticed and the casting of judgment and sense of importance that accompany curatorial decisions. But this meeting of curatorial minds extends beyond the perceived insularity of the contemporary art world by calling attention to the economic and political aspects of culture. The arts become a stand-in for the equalizing force of a bad economy. Everyone is struggling, has been violated, or has sacrificed. One woman covers herself in marijuana and lights herself on fire as an artistic protest; an artist takes people into his home only to be robbed of his most important work; a woman from the museum’s education department is dying and cannot be saved; artists have vanished, imprisoned themselves, become vampires.

In this play on art-world practices, the paralysis and fear that economic hardships instill are equated with the anxieties of being an artist. And yet My Barbarian’s work is decidedly optimistic. Despite the curators’ proclamation in the pilot episode that everything is now about the individual and that collectivity has failed (one curator hilariously pronounces that “half a person would be more interesting”), My Barbarian embraces and truly believes in the power of collaboration. Performance can be a model for the acting out of dissent, a continuous process of political participation, a space where, as they claim in a song about the mandate to participate principle, “our lives will get respect.” Films by Cameron Jamie: LA Premiere of Massage the History 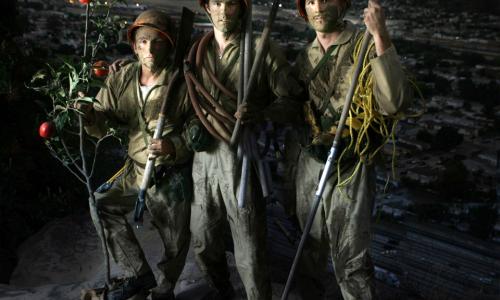