Swiss artist Nic Hess is known for his inventive wall works composed almost entirely of masking tape. Like a master graffiti artist, he turns everyday imagery into bold graphics often borrowing logos from corporations such as Chrysler, AT&T, Nike and even Mary Long cigarettes. Mixing drawing, bright colors and icons from a variety of sources, Hess makes us reevaluate our understanding of familiar signs in consumer culture. In his elaborate compositions he draws new connections and weaves a loose narrative of worlds colliding and visions exploding. For the Hammer’s Lobby Wall, Hess will present a new work specially designed for the site. 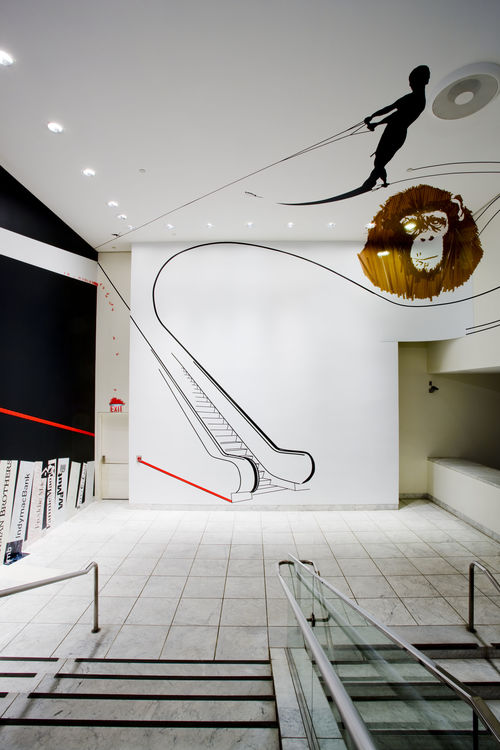 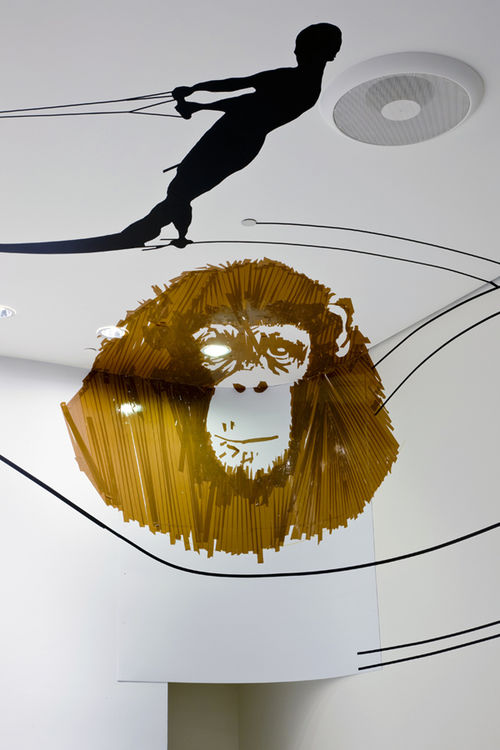 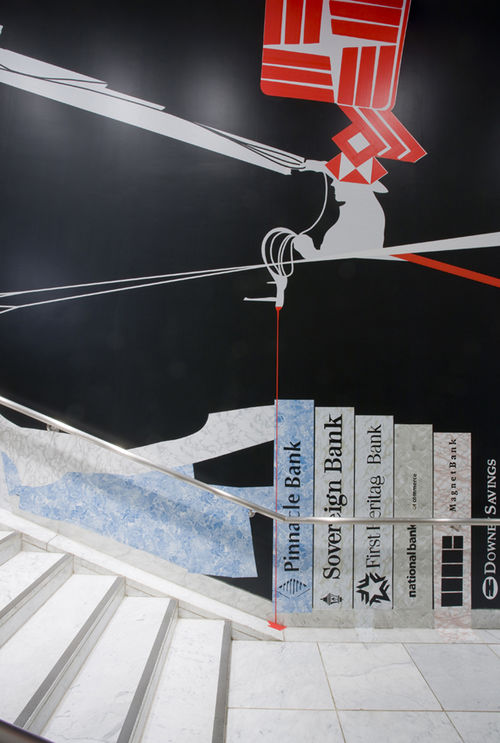 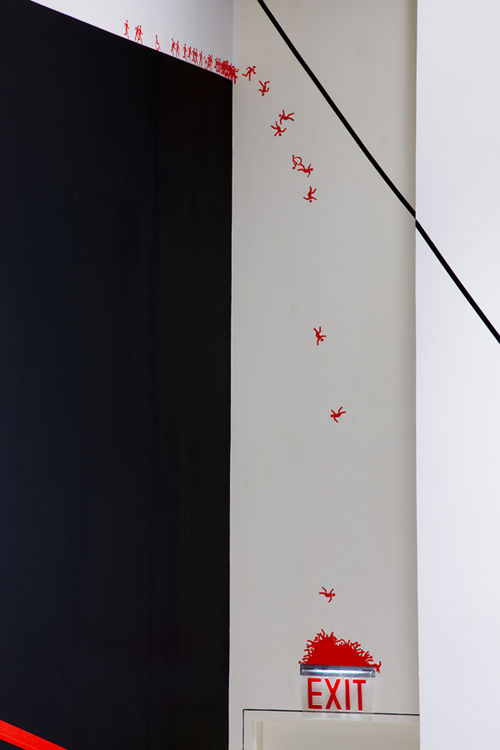 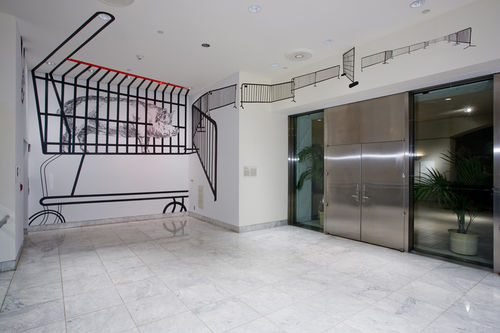 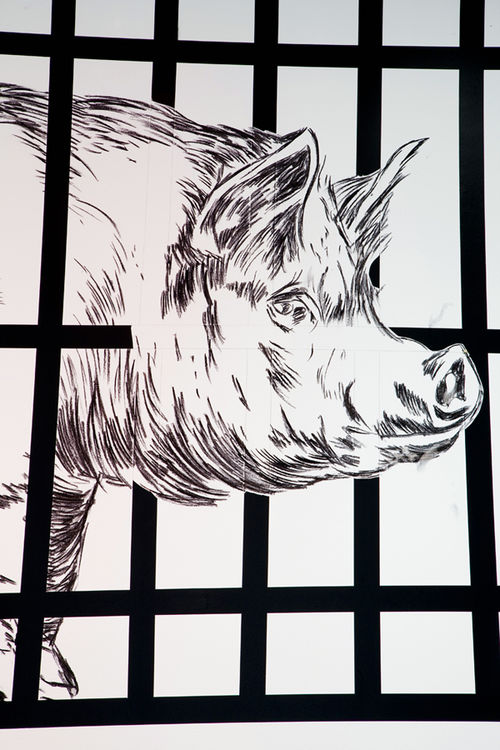 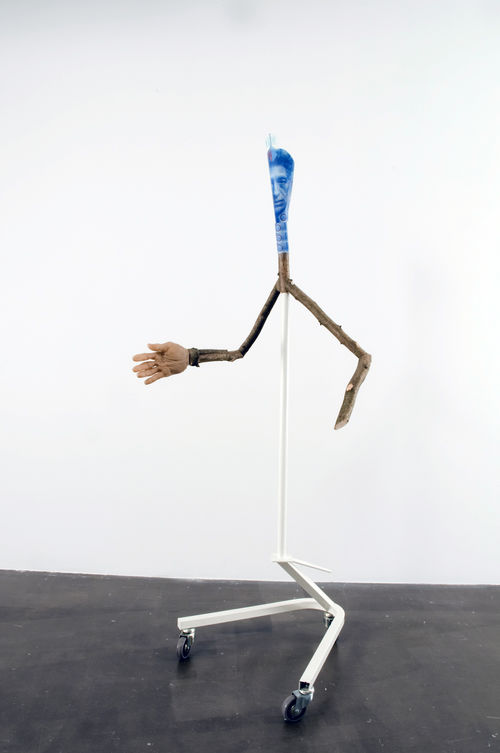 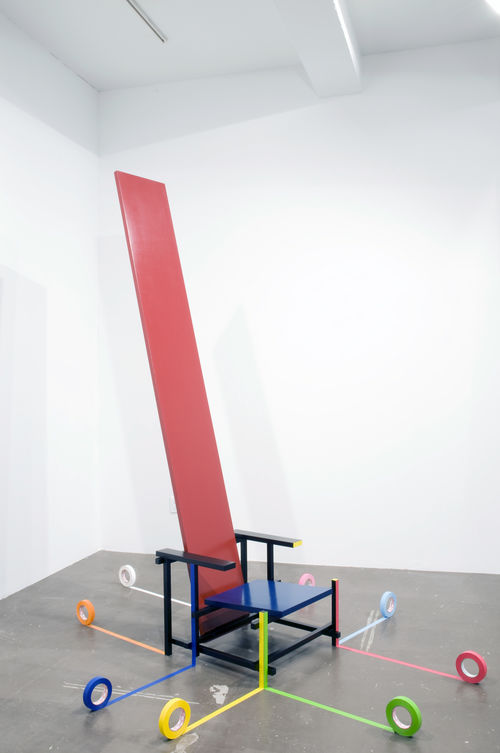 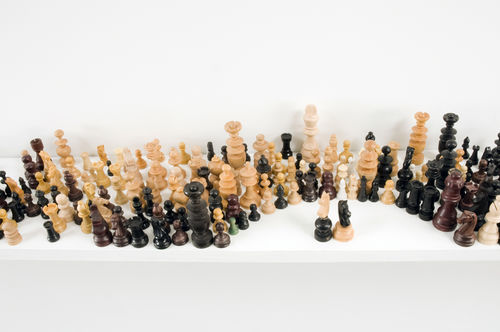 Swiss-born artist Nic Hess creates what he often refers to as drawing installations or tape drawings, which actively manipulate traditional art practices such as drawing, painting, sculpting, collage, and installation art.1 Hess collects images from fine art sources and commercial and popular culture, and he draws them in a way that removes the traditional hierarchy among the images, in a sense leveling art and commerce to an even playing field. Indeed, Hess is an inheritor of the aesthetic sensibilities of the British Independent Group and American pop art and their flattening of the traditional binary of high and low art. By redeploying the tradition of appropriation, Hess’s art consumes the barrage of images that bombard us everywhere, in every way.

In his work Well Done (2001), for example, the artist takes the iconic Nike swoosh and Jacques-Louis David’s Death of Marat (1793) and intertwines the two completely disparate images to form an entirely new visual. Hess reminds us that there is no reprieve from the global marketplace, yet he also imbues the familiar corporate logos and historical images with his own personal history. For example, Jean-Paul Marat, like Hess, was a Swiss-born intellectual and writer at a time of great political and economic turmoil. Hess too is concerned with politics and the economy, but he deploys a certain postmodern sensibility that blatantly acknowledges that there is no black and white in our current political sphere (and perhaps there never was); furthermore, Well Done was made at the time of the second American-led invasion of Iraq. So unlike Marat’s unyielding political theories and ideals, Hess’s art (as text) is politically ambivalent and open-ended, visualizing, for better or worse, our current political and economic climate.

Hess’s site-specific tape drawing 51 Views of Mount Matterhorn (2001), which is ironically titled after Katsushika Hokusai’s Thirty-six Views of Mount Fuji (ca. 1826), was commissioned by, as well as installed at, the Dow Chemical European Headquarters in Switzerland. As with most of Hess’s artwork, the drawing-installation makes an assemblage of various corporate logos (AT&T’s globe, Lufthansa’s crane, Dow’s logo, and others) that are globally connected, and the logos emerge from various lines that at one point form a Mondrianesque tape drawing that obliterates any hierarchy between so-called fine and commercial art. It is ironic that Hess deploys the logos of other corporations for his sitespecific tape drawing for the headquarters of a company that is emblematic of not only the rise but also the reign of multinational corporations in our late capitalist era, which now, in 2009, faces a global collapse.

Like much American pop art, Hess’s artwork is ambivalent in its position on capitalism and consumerism. This is especially true because he always incorporates multiple and contradictory images and viewpoints, opening the work to various readings and positions, which is to say that he creates a “heterogeneous sensibility.”2 In many ways, lines (made by tape, paint, or photo transfers) fill his art, as do views and perspectives, which once again tie back to the open-ended nature of his artwork and practice. In the end it is the viewer’s responsibility to extrapolate from the multiple references and produce meaning, and this is what makes Hess’s work both tantalizing and frustrating. Just as there is not one view, but rather fifty-one views in Hess’s Mount Matterhorn—if not more—there are just as many ways to interpret his artwork. Without a doubt, his art practice and production place his viewers in the roles of producers and consumers, and this is because his artworks are “open texts” that replace the finished work with something that is constantly in flux or in progress. His artwork explodes the tyranny of the singular, which then opens an array of multiplicities, just as the lines in his drawing-installations explode a center. Hess’s drawing-installations do not call for a singular and proper viewing position; rather, his art does away with linear one-point perspective, opting instead for a Nietzschean visual perspectivism. This is made abundantly clear in the drawing-installations 279 (2001) and Who Bites First (2003), in which there is no center and thus no singular perspective but only “lines of flight”—and a series of Lichtenstein-inspired explosions that heighten the feeling of disorientation.

In viewing Hess’s oeuvre, one begins to realize the intransience of his work: the artworks cannot be moved without, in a sense, being destroyed. They are not discrete and portable art objects that may be resituated into a variety of locations or contexts. On occasion, however, he has transformed his drawing-installations into sculptures: the tape is taken off the wall and made into a sculptural object (he balls up the tape remnants), which he calls implosions; the drawing-installation collapses inward even as meaning multiplies outward. Indeed, a transformation takes place, as opposed to transportation. Like the lines that cover the wall, often converging into recognizable images, we, the viewers, are inspired to follow a line of flight.

In his drawing-installation for the Hammer, Hess is literally playing a game of chutes and ladders (the board game influenced the artist’s designs for the installation), sliding, climbing, and looping, movements that tie back to his constant recycling of images. One particular image of a crawling baby exemplifies his investment in the “multiplicity of futurity,” the idea that positions and meanings are always to come. As in all of Hess’s works, there is no stable or singular horizon line. The baby has two heads that are facing in opposite directions—in a simultaneous dorsal movement. It crawls/walks, traveling much like the (dis)continuous lines that make up Hess’s artwork. This image, placed in close proximity to the text “pour l’avenir” (for the future), illustrates the unknown potentialities and possibilities of the fractured subject and the future.

Furthermore, just as one has to turn one’s body at a forty-five-degree angle to take in the entirety of Hess’s work, one also turns toward the future. So if there are ideas that his artwork clearly communicates, they include its multiplicity of meanings and the never-ending possibilities and potential directions of life—its aim for the future. Indeed, in the time in which we find ourselves, Hess is offering hope, which can be found only in and of the future, and which we can get a glimpse of only if we turn ourselves around.

1. Hess insists that his works function as “drawing-installations or tape drawings” (interview with the author, March 6, 2008).

2. On “heterogeneous sensibility,” see Jacques Rancière, The Politics of Aesthetics.

Robert Summers is completing his PhD in art history at UCLA. He has published texts in anthologies and journals, such as Borderlands, Art US, Dead History, and Live Art, and has presented papers and chaired panels nationally and internationally. 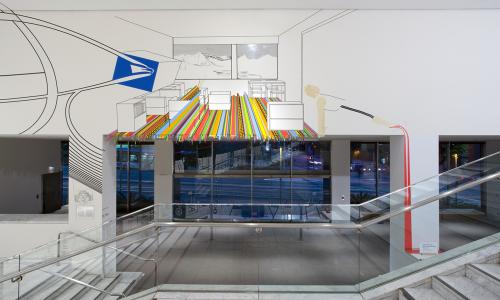