LA-based Claude Collins-Stracensky takes as his subject the fundamental aspects of the natural world—light, energy, and time—in a practice that embraces a range of mediums. The exhibition will present a group of new sculptures and two new large photographic lightbox wall reliefs, alongside a selection of photographs taken since 2001. From the face of a boulder rendered a glowing silver by the sun to a dramatically collapsed pavilion near the Santa Monica airport after a wind storm, Collins-Stracensky’s images capture moments that heighten our awareness of the constant interactions and changes occurring in our environment between systems, materials, and forms. Our desire to contain nature and our mediated experience of the natural world is explored in several recently completed sculptures, which consist of 2-way mirror tinted and perforated glass and colored Plexiglas vitrines containing objects such as painted palm fronds and sea shells placed atop precisely rendered steel bases. The filtering of visual information and the need to view the sculptures from multiple vantage points will be mirrored by Collins-Stracensky’s interventions into the space for which he will make perforations in the walls and install colored film onto the windows. Claude Collins-Stracensky was born in Lakewood, Ohio, in 1975 and lives in Los Angeles. He received his MFA from the University of Southern California in 2003 and his BFA from the Cleveland Institute of Art in 1997. He has had solo projects at Kantor/Feuer Gallery, Los Angeles, and Los Angeles Contemporary Exhibitions (LACE). In 2003 he had a two-person show at Anna Helwing Gallery, Los Angeles, and he has participated in group exhibitions at Cherry and Martin, Los Angeles; Sister Gallery, Los Angeles; Le Magasin, Grenoble, France; Taxter & Spengemann, New York; and the Contemporary Museum, Baltimore, among others. He has participated in a number of group performances, including 88 BoaDrum with the Boredoms at the Los Angeles County Museum of Art and Into the Vacuum at the Hammer Museum with Jim Shaw. This is Collins-Stracensky’s first solo museum exhibition. 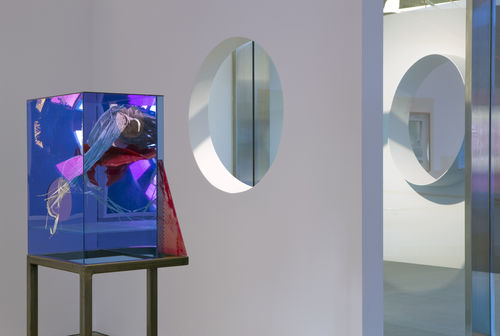 If you ask Claude Collins-Stracensky about his artistic practice, he may recount a sketch that he saw on Dave Chappelle’s show in which the comedian tells the same story from two different perspectives. The story is not told from the perspectives of two different people, however, as one might expect; rather, each version is from Chappelle’s own perspective, and yet each is wholly different from the other. They are so distinct, in fact, that the experience itself—albeit ostensibly the same event happening at the same time to the same person—is completely altered. And the fundamental element responsible for this shift in perception is time. Chappelle describes walking into a Laundromat, once in slow motion and once in real time. In the slow-motion version the sequence of events is everything he wants it to be: A beautiful woman enters with requisite wind blowing through her hair and begins to sort her lingerie. She beckons Chappelle over, and they dance erotically. Conversely, nothing remarkable happens in the real-time version. Fluorescent lighting sets the tone, and banality persists. Being at the Laundromat is just what it is often understood to be: a chore. Chappelle is making fun of himself and the technological tricks that we use to enhance our experiences, but the question remains: is his slow-mo version only a fantasy? Or could both experiences of time, and the divergent perception of events that accompany them, be happening concurrently?

This type of multidimensional experience of time is what Jorge Luis Borges called “the swarming sensation,” an indescribable and intangible feeling that is nonetheless inevitable or, put another way, is always present, if only we would pay attention. Borges describes this sense of time as infinite, “a growing, dizzying net of divergent, convergent and parallel times.”1 The “garden of forking paths” of Borges’s eponymous story, it turns out, is not a spatial proliferation, but a temporal one. Chappelle has the moving-image medium of television at his disposal, so his two versions of the scene can be acted out for an audience. For Collins-Stracensky, a visual artist working with sculpture and still images, the challenge is how to instigate this swarming sensation in relationship to what have traditionally been considered inert objects.

One starting place for Collins-Stracensky is the inspiration of his progenitors in the exploration of perceptual experiences of art: the highly influential light-and-space artists working in Los Angeles beginning in the 1960s, especially Robert Irwin and Larry Bell. Irwin has claimed that nothing is static: energy is everywhere and in everything, and yet we overlook it all the time. His practice has been devoted to encouraging us to become more aware of how we experience the world and to heightening our powers of perception. Similarly, Collins-Stracensky uses various means to awaken his viewers to their surroundings and to illuminate the constant changes and interactions among systems, materials, and forms occurring in our environment. The fundamental aspects of the natural world—light, energy, and time—are at the core of his practice, acting as both subject and material. These concerns are perfectly captured in two new large-scale light boxes that feature photographs of a moving Ferris wheel. In one, Collins-Stracensky uses a slow shutter speed, and the motion of the wheel is rendered as circles of abstract light full of dizzying energy, while in the other image the action is captured in staccato movements, which render the participants more visible.

The boundaries between inside and outside are fluid in Collins-Stracensky’s work. A group of four new sculptures consist of rectangular “vitrines” placed atop customized steel bases rendered in elegant one-inch tubing. In traditional sculpture such vitrines and bases would be secondary to the work of art, simply a method for display and protection. Here they are as integral to the work as what one finds inside the geometric enclosures. The vitrines are composed of colored Plexiglas or tinted two-way mirrored glass that is simultaneously transparent and opaque, so that while you are able to see through it, the surrounding space and your own reflection are constantly present, interfering with or enhancing your view. Light is absorbed and refracted. Space is contained and intimate while also expansive and infinite.

Collins-Stracensky’s boxes are reminiscent of Bell’s investigations into visibility and the potential of art to transcend its fixed position as an object. Bell’s desire to create sculptures that are seen from the inside out resonates when viewing Collins-Stracensky’s sculptures. Artists of Bell’s generation who were absorbed in questions of perception wanted to refute the minimalists’ insistence that the work of art is what it is and nothing more.2 Collins-Stracensky is inspired by this more expansive view, beautifully articulated by Peter Frank when he said of Bell’s work, “what you see is never only what you see.”3

Collins-Stracensky’s vitrines, however, are not perfectly sealed boxes like Bell’s or like Hans Haacke’s Condensation Cube (1963–65). Panels slide open, creating small windows, and the surfaces have been perforated with circular openings, like peepholes providing access to what is hidden inside. The reflectivity of the panels, coupled with these viewing apertures, encourages intimacy. Viewers must move close and lean in. They are encouraged to circle the sculpture and view it from different vantage points. To understand the work is to spend time with it. To experience it fully, you must also see yourself seeing it. The act of viewing itself is as much a part of the work as what is being viewed.

Irwin, Bell, James Turrell, and other light-and-space artists studied perceptual psychology and phenomenology and participated in sensory-deprivation experiments in anechoic chambers to monitor their physical responses. Subsequently, many of them became interested in heightening sensory experience by limiting the amount of visual and perceptual input provided by their artworks. Through sculptural objects and room-size installations using light and color as primary materials, they pared down their works, isolating and exaggerating specific input. Collins-Stracensky, by contrast, observes the world and brings it into the work. His vitrines are filled with found natural objects—palm fronds, seashells, dried grasses—and as with his photographs, the sculptures’ contents become a visual journal of his experiences in the world. The way the works contain nature is not about a need to control it but is instead connected to a deep and ongoing observation of it. Indeed, more than simple observation, the sculptures reflect the artist’s participation in nature.

Moments when the energy of the natural world bursts forth—when it cannot be predicted or contained—captivate Collins-Stracensky, but he is also attuned to quiet, persistent examples of interaction. Studies in light and energy manifest as photographs, capturing the constant negotiations that take place between humans and our natural environment. The enormous energy evident in the image of a metal pavilion near the Santa Monica Airport demolished (or “rearranged,” as the artist likes to think of it) by a windstorm is juxtaposed to subtler but more ubiquitous instances, like the tree stubbornly growing through a crack in the poured-concrete wall of an urban overpass. The intensity of light that illuminates a boulder with a metallic silver glow can be compared with the dispersed light reflected on a puddle, its pristine surface broken by a few fall leaves, reminiscent of the grass protruding through the hole in the sculpture Species of Spaces and Other Places (2007-8). Just as Chappelle uses humor as a filter through which to see the world in new ways, Collins-Stracensky points out, through his photography, the various filters we use to understand our surroundings while also creating, in his objects, visual filters that exaggerate the viewing process. He uses the space of the gallery and its proximity to the outside to further enhance the dialogue between interior and exterior. By boring a large hole in the gallery wall facing Westwood Boulevard and painting its exterior a bright fluorescent pink, he brings light and color into the gallery, changing the atmosphere depending upon the time of day. The wall facing the entrance to the gallery is also perforated, allowing a view from the lobby into the gallery all the way through the opening in the Westwood window to the outside, and the windows are covered with a tinted film, so that the gallery itself becomes like one of Collins-Stracensky’s vitrine sculptures writ large. Here viewers no longer stand beside the sculpture looking in; they become an element within the vitrine, continuously (to borrow one of the artist’s titles) “looking in at looking out.”

2. Frank Stella famously stated, “What you see is what you see.”

Anne Ellegood is senior curator at the Hammer Museum.

Spatial Expansion, The Oneness and the Suchness
Claude Collins-Stracensky: Sunrise to Sunset

Spatial Expansion, the Oneness and the Suchness