Several years ago, Kaari Upson found some discarded personal items that belonged to a stranger. Digging into this man's past, she made him the primary subject of her artwork. For her Hammer Project, Upson introduces her drawn, painted, and videotaped interpretations of this real man's story, illustrating several possible profiles of a man she may know better than herself. Kaari Upson was born in San Bernardino, California, and lives in Los Angeles. She studied art at the New York Studio School and at the California Institute of the Arts, Valencia, where she received her BFA in 2004 and her MFA in 2007. She has participated in exhibitions at High Energy Constructs, Los Angeles, and 507 Rose, Venice, California, as well as in numerous shows at the galleries of CalArts. This is Upson's first museum exhibition. 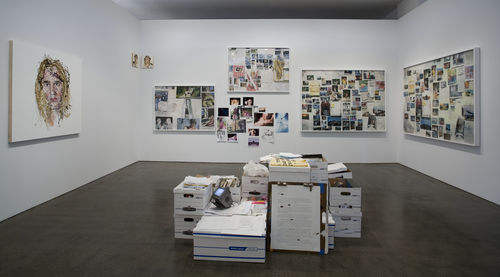 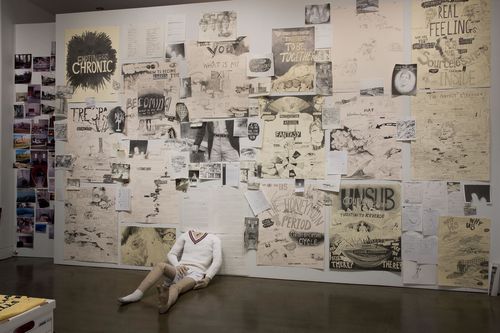 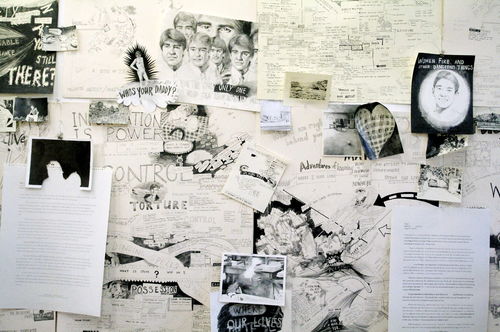 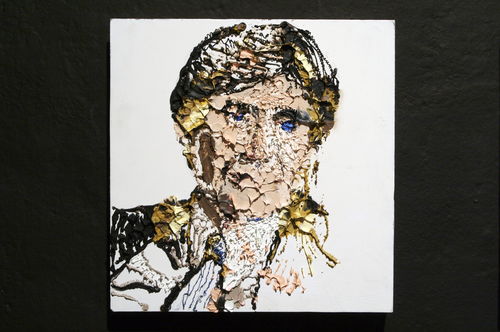 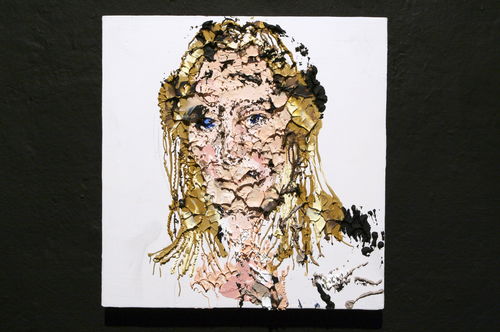 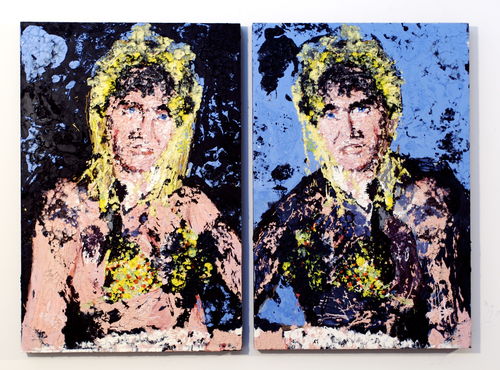 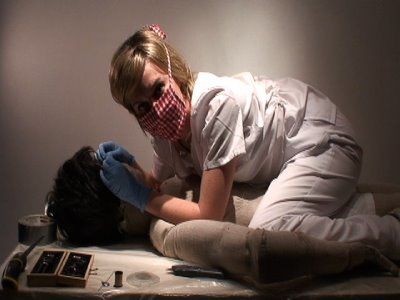 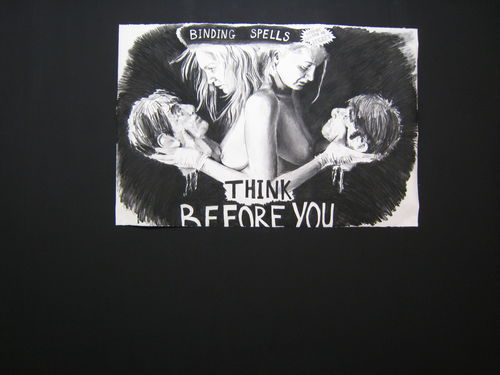 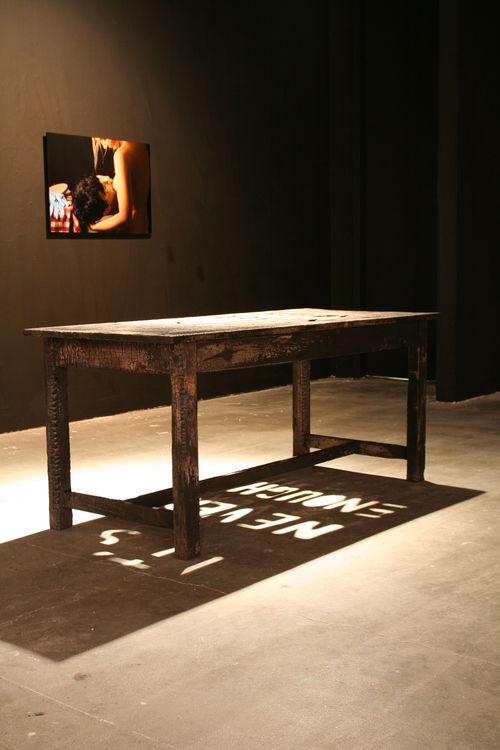 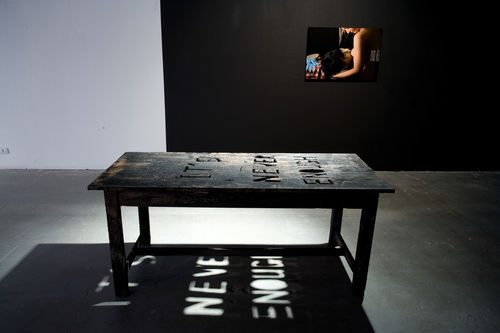 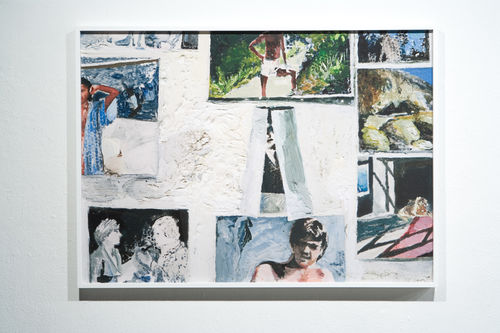 At first she seemed a little nuts, high-strung, sort of like a cheerleader on speed. So much to look at—drawings, a table made of charred wood, paintings, a red gingham Playboy Bunny outfit straight out of an X-rated episode of Hee Haw. Along the floor were stacks of file boxes, and snapshots filled the walls. Visual information burst out of every corner. Then she started to tell the story, or stories, I should say. There’s this guy named Larry. He was a bit of a playboy, always hanging out with the ladies, into Hugh Hefner and Frisbee and astrology and self-improvement; he even attended EST in the ‘80s. Then the story turned into a fantasy, adventure, and romance novel with multiple endings.

Upson found some personal items that the guy had apparently left behind. She took on the task of researching him and gave him a multidimensional life while merging his world with her own. She destroyed any notion of separation between herself, the artist, and her “unsub” (unknown subject). Digging into his past, searching for answers and leads into who he was and why he did the things he did, while at the same time creating fantasy and conjecture, she evolved from reflective artist (she was trained as a painter) into private investigator, and eventually all objectivity disintegrated. He became her obsession. Her lover. Her nemesis. Her muse. Her father. This was not even about finding out who Larry was anymore. She had crossed the line and blindly leapt into an alternate world. As she explains it, “The objective reality of the man I construct collapses into the subjective fiction I create, until they merge and I am more him than he is.”1

In the beginning she relied heavily on the Internet and was able to gain access to a lot of information quite easily and legally. Then she moved on to a more intuitive approach: she had his handwriting analyzed and got his-and-her astrological charts. She painted a portrait of him, and while it was still wet, smashed it face-to-face with her own self-portrait. Their faces literally merge in these “kiss” paintings. She carefully studied the photos and facts and painted incredibly small, almost fetishized compositions of snapshots and found documents. She then photographed these miniature paintings at the highest resolution possible (the size used for fingerprint analysis) and blew them up so that they operate as forensic documents revealing fingerprints, hairs from the paintbrush (and from the artist), and pieces of lint and dust. But all these traces are from the artist, and the enlarged images only took him more out of focus. Here she began to collapse her own identity into his as her physical evidence superseded clues about him.

She began to diagram the bits and pieces in an attempt to understand what she had discovered. “I am more him than he is.” “Becoming: What do you need me to be?” “Information is power.” “Control.” “Trespass.” “What’s yours is Mine.” “Groom-by-Capture Cycle.” Among her ramblings and notes and questions and theories she filled huge sheets of paper with pencil drawings of him and her.

Her obsession grew, and she decided to make him into something tangible, something she could hold and feel. She made a life-size dummy. She gave him bright blue eyes and a mop of dark brown hair. She acted out intimate and sexual scenarios for the camera. She even posed for pictures with him and their “love child” on the beach. This was the “Honeymoon Period.” But of course all honeymoons come to an end. So she cut him up.

In the video Upson appears to be somewhat maniacal yet matter-of-fact, like a QVC jewelry saleswoman rambling on and on to fill up air time and sell her wares. She wears makeshift white surgical scrubs. The Larry dummy lies on the table with a sewing kit next to his still head. She puts on her blue surgical gloves and begins to speak while patting his head and straightening his hair. Her surgical mask is homemade out of red gingham. “I’ve absolutely never met him,” she says, setting her hands on his chest lightly and then beginning to unbutton his shirt. She continues to recite facts and statements about how she came to know this mystery man, all the while prepping him for surgery. She repeats herself and continues the story as she threads a needle. His shirt is off, and she stitches his lips together. Her ramblings continue, and she begins to cut into his neck. Still telling the story, she starts to tug at his neck intensely. Occasionally she takes breaks, still talking, and affectionately touches him or tidies up his hair. Eventually she comes to straddle his body (he’s still wearing his pants), and after some tugging and awkward maneuvering, she decapitates him. In a final gesture illustrating their merging, she slips his head over her own and stares quietly into the camera.

Kaari Upson literally straddles the line between moral and inappropriate behavior, making viewers squirm or stare wide-eyed with mouth agape at the audacity of such an intense pursuit of a stranger. And she doesn’t make her intentions known; we don’t know why she’s chasing this guy and how he relates to her own identity. In the end her intentions are as ambiguous as his identity. As the artist she decides what information to feed us, how to shape our impressions, and what we see and understand.

Blurring the lines of reality and fantasy, public and private, self and other, Upson demonstrates the ultimate futility of our efforts to really know someone. No matter how much information she has compiled—or how many forms she uses to convey that information, including drawings, paintings, video, and prints—there is no single, well-defined character that surfaces from the project. As viewers we feel the confusion and manic curiosity of the artist and maybe even empathize with her quest to know him. There is no clear perspective, literally and metaphorically, and his image and persona become increasingly distorted. Like Sophie Calle before her, she has taken another person and made his story the artwork. But she’s gone even further than Calle, making the entire project into something highly personal and intimate.

This project raises so many issues. Why this man? What does he really mean to her? Does she distinguish between the real guy and his alternate personas? Has she met him? Is this ethical? Is she a stalker? Is she insane? Is this art? After all, everybody alters and bends identity over time: think about how different you are now from who you were ten years ago. As Upson explains, “The challenge of defining the ‘me’ in this project is a final manifestation of the loss of perspective [that] it presents.” Who’s to say which perception is the real one?

1. All quotations are taken from Kaari Upson's MFA thesis, California Institute for the Arts, Los Angeles, 2007.

Ali Subotnick is a curator at the Hammer Museum. 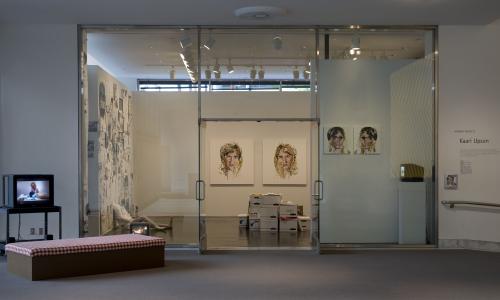